More interesting than the study of modern populations of the paper is the following excerpt from the introduction, referring to a paper that is likely in preparation, Európai És Ázsiai Apai Genetikai Vonalak A Honfoglaló Magyar Törzsekben, by Fóthi, E., Fehér, T., Fóthi, Á. & Keyser, C., Avicenna Institute of Middle Eastern Studies (2019):

Certain chr-Y lineages from haplogroup (hg) N have been proposed to be associated with the spread of Uralic languages. So far, hg N3 has not been reported for Indo-European speaking populations in Central Europe, but it is present among Hungarians, although the proportion of hg N in the paternal gene pool of present-day Hungarians is only marginal (up to 4%) compared to other Uralic speaking populations. It has been shown earlier that one of the sub-clades of hg N – N3a4-Z1936 – could be a potential link between two Ugric speaking populations: the Hungarians and the Mansi. It is also notable that some ancient Hungarian samples from the 9th and 10th century Carpathian Basin belonged to this hg N sub-clade: Three Z1936 samples were found in the Upper-Tisza area (Karos II, Bodrogszerdahely/Streda nad Bodrogom) and two in the Middle-Tisza basin cemeteries (Nagykörű and Tiszakécske). The haplotype of the Nagykörű sample is identical with one contemporary Hungarian sample from Transylvania that tested positive for B545 marker downstream of N3a4-Z193632. Similar findings come from the maternal gene pool of historical Hungarians: the analyses of early medieval aDNA samples from Karos-Eperjesszög cemeteries revealed the presence of mtDNA hgs of East Asian provenance.

A commenter recently wrote that in a study by Fehér (probably this one) two Hungarian conquerors, from Ormenykut and Tuzser, will be of hg. N1c-2110. Assuming no other lineages will appear, this would leave the proportion of N1c-L392 vs. R1a-Z280/Z93 closer to the reported proportion of hg. N vs. R1a (5 vs. 2) among Sargat samples, and is thus compatible with a direct migration of Hungarians from around the Urals.

However, the sampling of Iron Age populations around the Urals is scarce, and we don’t know what other lineages these studied Magyars will have, but – based on the known variability of the published ones, and on the ca. 50-60 early Magyar males available to date in previous studies to obtain Y-chromosome haplogroups – I would say these reported N1c lineages are just a tiny proportion of what’s to come…

Archaeogenetic studies based on mtDNA haplotypes have shown that ancient Hungarians were relatively close to contemporary Bashkirs who are a Turkic speaking population residing in the Volga-Ural region. Another study reported excessive identical-by-descent (IBD) genomic segments shared between the Ob-Ugric speaking Khantys and Bashkirs but a moderate IBD sharing between Turkic speaking Tatars and their neighbours including Bashkirs.

Modern distribution of the “Ugric N1c”

To test the presence and proportions of hg N3a4 lineages in a more comprehensive sample set and with a higher phylogenetic resolution level compared to earlier studies, we analysed the genotyping data of about 5000 Eurasian individuals, including West Siberian Mansi and Khanty who are linguistically closest to Hungarians

There is a clear difference in geographic distribution patterns of these two hg N3a4 sub-clades. Hg N3a4-B535 (Fig. 3b) is common mostly among Finnic (Finns, Karelians, Vepsas, Estonians) and Saami speaking populations in North eastern Europe. The highest frequency is detected in Finns (~44%) but it also reaches up to 32% in Vepsas and around 20% in Karelians, Saamis and North Russians. The latter are known to have changed their language or to be an admixed population with reported similar genetic composition to their Finnic speaking neighbors. The frequency of N3a4-B535 rapidly decreases towards south to around 5% in Estonians, being almost absent in Latvians (1%) and not found among Lithuanians. Towards east its frequency is from 1–9% among Eastern European Russians and populations of the Volga-Ural region such as Komis, Mordvins and Chuvashes (…)

Hg N3a4-B539, on the other hand, is prevalent among Turkic speaking Bashkirs and also found in Tatars but is entirely missing from other populations of the Volga-Ural region such as Uralic speaking Udmurts, Maris, Komis and Mordvins, and in Northeast Europe, where instead N3a4-B535 lineages are frequent. Besides Bashkirs and Tatars in Volga-Ural region, N3a4-B539 is substantially represented in West Siberia among Ugric speaking Mansis and Khantys. Among Hungarians, however, N3a4-B539 has a subtle frequency of 1–4%.

The battle to appropriate N1c-L392

So, basically, the team of Kristiina Tambets is arguing that N1c-VL29 expanded Finnic to the East Baltic (hence from a common Finno-Mordvinic dialect splitting ca. 600 BC on?) because, you know, apparently the agreed separation of known Uralic dialects from ca. 2000 BC, and their Bronze Age presence around the Baltic, is not valid when you follow haplogroups instead of languages or archaeology.

But now this other group of Tambets (co-author of this paper) considers that hg. N1c-Z1936 – which is probably behind the N1c-L392 samples from Lovozero Ware in the Kola Peninsula – represent either the True Uralic-speaking Palaeo-Arctic peoples, or else merely Ugric-speaking peoples which happened to expand to Fennoscandia but left no trace of their language…

To accept this identification you only have to NOT ask why:

In fact, the Hungarian research group of Neparáczki – publishing the recent paper on Hungarian Conquerors – was apparently looking for a connection with Turkic peoples to support some traditional Turanian myths, and they found it in some scattered R1a-Z93 samples which supposedly connect Hungarian Conquerors to Huns (?), instead of looking for this closer link through N1c-Z1936 (especially haplotype B539)…

Also, is it me or are there two opposed trends with completely different interpretations among researchers publishing papers about hg. N1c: one systematically arguing for Altaic origins, and another for Uralic ones?

If somebody sees some complex reasoning behind the discussions of all these recent papers, beyond the simplest “let’s follow N for Uralic/Altaic”, feel free to comment below. Just so I can understand what I might be doing wrong in assessing Neolithic and Bronze Age migrations in linguistics and archaeology with help of ancient haplogroups coupled with ancestral components, but these researchers are doing right by playing with obsessive ideas born out of the 2000s coupled with phylogenetic trees and maps of modern haplogroup distributions…

This is probably going to be this blog’s most used image in 2019: 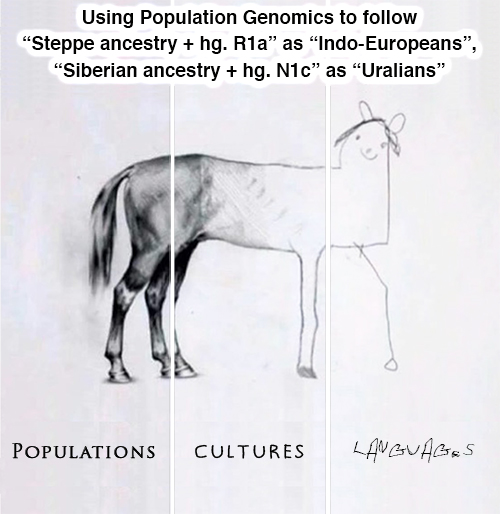 It is good practice to be registered and logged in to comment.
Please keep the discussion of this post on topic.
Civilized discussion. Academic tone.
For other topics, use the forums instead.
12 Comments
Oldest
Newest
Inline Feedbacks
View all comments