The following text contains a description of Proto-Turkic and its main dialectal split. Contacts with Samoyed, Ob-Ugric, Iranian, Yeniseian, Tocharian, Chinese and Mongolic, as well as palaeolinguistics, hydronymy, and ethnonymy are taken into account to pinpoint the succeeding homelands and expansion territories. The archaeological-archaeogenetic discussion is focused on the Middle and Late Bronze Age Altai Mönkhkhairkhan and Deer Stone-Khirigsuur Complex and related groups, as well as on Ulaanzukh; Early Iron Age “Scytho-Siberian” Pazyryk & Uyuk and Slab Grave cultures; and on the Late … Read the rest “Proto-Turkic homeland”

The following text contains a description of Pre- and Proto-Samoyedic stages and its dialectal diversification. Contacts with Indo-Iranian, Yeniseian, Tocharian, Yukaghir, and Turkic, as well as onomastics and palaeolinguistics are taken into account to pinpoint the succeeding homelands and expansion territories. The archaeological-archaeogenetic discussion is focused on the Middle Bronze Age Cherkaskul materials of the Andronovo period, on the Late Bronze Age Karasuk culture, and on the evolution and expansion of the Iron Age Tagar culture within the framework of “Scytho-Siberian” … Read the rest “Proto-Samoyed homeland”

This post is a continuation of a draft on palaeolinguistics and the Proto-Uralic homeland. Or, rather, a preliminary approach to the most likely key to understand the ultimate origin of Proto-Uralic.

Despite the multiple far-fetched proposals of long-range connections between Asian languages and Uralic – e.g. Ural-Altaic, Uralo-Siberian, Eskimo-Uralic, or Uralo-Dravidian – its closest language family is evidently Indo-European, whether by inheritance or by long-lasting intertwined language developments. This supports that Pre-Proto-Uralic and Proto-Uralic developed in Eastern Europe, always close to the Proto-Indo-European homeland. Therefore, it can be assumed that they were subject … Read the rest “Proto-Uralic Homeland (IX): West Caucasian”

The following text contains a description of Ob-Ugric languages and their connection within an Ugric Sprachbund. Special emphasis is placed on their evolution among surrounding ethnolinguistic groups before they were first documented, and on their most likely connection with archaeological cultures succeeding the Seima-Turbino phenomenon in the Southern Urals and the Trans-Urals. The archaeological-archaeogenetic discussion is therefore focused on the Middle Bronze Age Cherkaskul and Late Bronze Age Andronovo-like cultures, as well as on the formation of the “Scythian” Sargat … Read the rest “Ob-Ugric Homeland”

The following text contains a description of Yeniseian languages, their dialectal groupings and likely evolution among surrounding ethnolinguistic groups before they were first documented. Special emphasis is placed on ancient Yeniseic formants for water bodies, widely distributed through Western, Southern, and Central Siberia. Finally, the archaeological-archaeogenetic discussion is focused on Early Bronze Age Glazkovo-related and Okunevo-like cultures, due to their patrilineal connection to sampled Yeniseian and ancient Na-Dene populations.

The long-lasting intertwined ethnolinguistic developments of East Uralic speakers with Palaeo-Siberian populations makes it impossible to split up a post about the evolution of the former without discussing the fate of the latter.

External contacts with other indigenous East Asian languages close to the Altai-Sayan region and Circum-Baikal area are also relevant, but would no doubt turn this post series into an unending task. Therefore, I will focus on the western part of the Baikal Neolithic and Neo-Siberian-related ancestry clines, which seem more relevant for the ancient stages of Ob-Ugric and Samoyed developments. 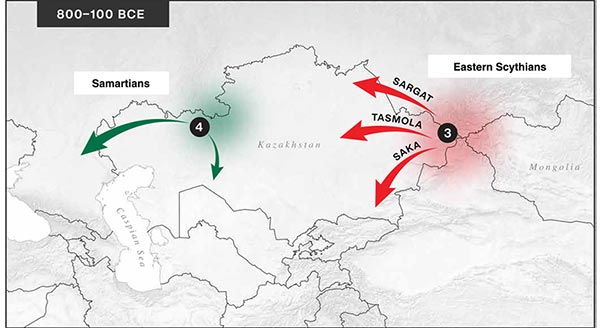 Oral communication Ancient DNA and the New Science of the Human Past by David Reich (March 3, 2021).

I noticed this interesting slide called “Caught red-handed”, at approximately 45m 17s, where David Reich asserts that sampled Corded Ware populations had many “close cousins” with Yamnaya-related populations “within generations”. The method could also be used, always according to Reich, to identify “who the Yamnaya mixed with to form groups like Corded Ware”.

To date no archaeological find is generally accepted as evidence for a direct contact between Germanic tribes and Early Slavs in Central Europe (Brather, 2004). Here we report a novel archaeological find in support of a direct contact: a rune-inscribed fragment of a bone from the late 6th century found in a Slavic settlement. Runes are an alphabetic script, called fuþark,

… Read the rest “Germanic runes in the Prague-Type Pottery culture”