After some really interesting fantasy full of arrows, it seems Kristiansen & friends are coming back to their most original idea from 2015, now in New Scientist’s recent clickbait Story of most murderous people of all time revealed in ancient DNA (2019):

Teams led by David Reich at Harvard Medical School and Eske Willerslev at the University of Copenhagen in Denmark announced, independently, that occupants of Corded Ware graves in Germany could trace about three-quarters of their genetic ancestry to the Yamnaya. It seemed that Corded Ware people weren’t simply copying the Yamnaya; to a large degree they actually were Yamnayan in origin.

If you think you have seen that movie, it’s because you have. They are at it again, Corded Ware from Yamna, and more “steppe ancestry” = “more Indo-European“. It seems we haven’t learnt anything about “Steppe ancestry” since 2015. But there’s more:

Burial practices shifted dramatically, a warrior class appeared, and there seems to have been a sharp upsurge in lethal violence. “I’ve become increasingly convinced there must have been a kind of genocide,” says Kristian Kristiansen at the University of Gothenburg, Sweden.

The collaboration revealed that the origin and initial spread of Bell Beaker culture had little to do – at least genetically – with the expansion of the Yamnaya or Corded Ware people into central Europe. “It started in It is in that region that the earliest Bell Beaker objects – including arrowheads, copper daggers and distinctive Bell-shaped pots – have been found, in archaeological sites carbon-dated to 4700 years ago. Then, Bell Beaker culture began to spread east, although the people more or less stayed put. By about 4600 years ago, it reached the most westerly Corded Ware people around where the Netherlands now lies. For reasons still unclear, the Corded Ware people fully embraced it. “They simply take on part of the Bell Beaker package and become Beaker people,” says Kristiansen.

The fact that the genetic analysis showed the Britons then all-but disappeared within a couple of generations might be significant. It suggests the capacity for violence that emerged when the Yamnaya lived on the Eurasia steppe remained even as these people moved into Europe, switched identity from Yamnaya to Corded Ware, and then switched again from Corded Ware to Bell Beaker.

NOTE. By the way, just so we are clear, only Indo-Europeans are “genocidal”. Not like Neolithic farmers, or Palaeolithic or Mesolithic populations, or more recent Bronze Age or Iron Age peoples, who also replaced Y-DNA from many regions… 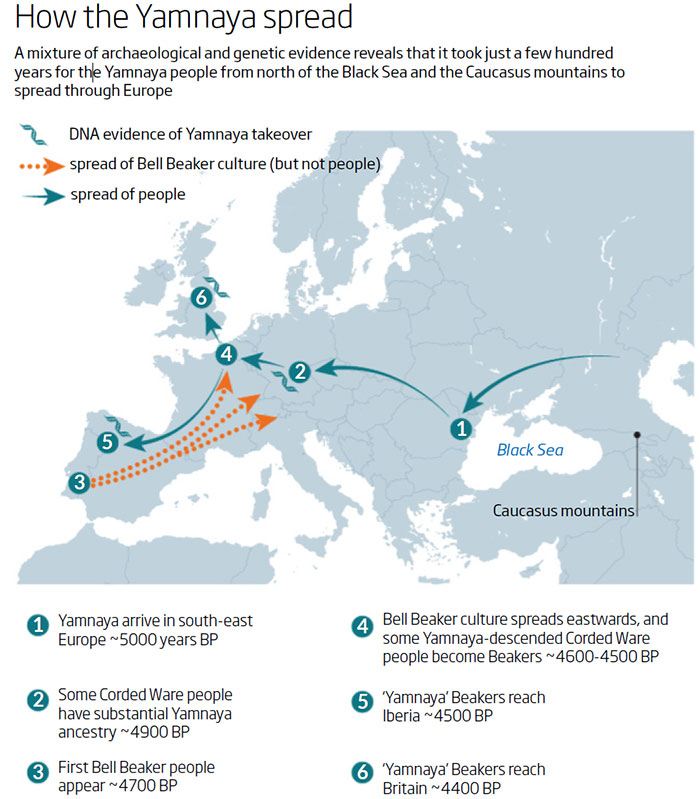 In fact, there is much stronger evidence that these Yamnaya Beakers were ruthless. By about 4500 years ago, they had pushed westwards into the Iberian Peninsula, where the Bell Beaker culture originated a few centuries earlier. Within a few generations, about 40 per cent of the DNA of people in the region could be traced back to the incoming Yamnaya Beakers, according to research by a large team including Reich that was published this month. More strikingly, the ancient DNA analysis reveals that essentially all the men have Y chromosomes characteristic of the Yamnaya, suggesting only Yamnaya men had children.

“The collision of these two populations was not a friendly one, not an equal one, but one where the males from outside were displacing local males and did so almost completely,” Reich told New Scientist Live in September. This supports Kristiansen’s view of the Yamnaya and their descendants as an almost unimaginably violent people. Indeed, he is about to publish a paper in which he argues that they were responsible for the genocide of Neolithic Europe’s men. “It’s the only way to explain that no male Neolithic lines survived,” he says.

So these unimaginably violent Yamnaya men had children exclusively with their Y chromosomes…but not Dutch Single Grave peoples. These great great steppe-like northerners switched culture, cephalic index…and Y-chromosome from R1a (and others) to R1b-L151 to expand Italo-Celtic From The West™.

It’s hilarious how (exactly like their latest funny episode of PIE from south of the Caucasus) this new visionary idea copied by Copenhagen from amateur friends (or was it the other way around?) had been already rejected before this article came out, in Olalde et al. (2019), and that “Corded Ware=Indo-European” fans have become a parody of themselves.

What’s not to love about 2019 with all this back-and-forth hopping between old and new pet theories?

NOTE. I would complain (again) that the obsessive idea of the Danes is that Denmark CWC is (surprise!) the Pre-Germanic community, so it has nothing to do with “steppe ancestry = Indo-European” (or even with “Corded Ware = Indo-European”, for that matter), but then again you have Koch still arguing for Celtic from the West, Kortlandt still arguing for Balto-Slavic from the east, and – no doubt worst of all – “R1a=IE / R1b=Vasconic / N1c=Uralic” ethnonationalists arguing for whatever is necessary right now, in spite of genetic research.

So prepare for the next episode in the nativist and haplogroup fetishist comedy, now with western and eastern Europeans hand in hand: Samara -> Khvalynsk -> Yamnaya -> Bell Beaker spoke Vasconic-Tyrsenian, because R1b. Wait for it…

On a serious note, interesting comment by Heyd in the article:

A striking example of this distinction is a discovery made near the town of Valencina de la Concepción in southern Spain. Archaeologists working there found a Yamnaya-like kurgan, below which was the body of a man buried with a dagger and Yamnaya-like sandals, and decorated with red pigment just as Yamnaya dead were. But the burial is 4875 years old and genetic information suggests Yamnaya-related people didn’t reach that far west until perhaps 4500 years ago. “Genetically, I’m pretty sure this burial has nothing to do with the Yamnaya or the Corded Ware,” says Heyd. “But culturally – identity-wise – there is an aspect that can be clearly linked with them.” It would appear that the ideology, lifestyle and death rituals of the Yamnaya could sometimes run far ahead of the migrants.

NOTE. I have been trying to find which kurgan is this, reviewing this text on the archaeological site, but didn’t find anything beyond occasional ochre and votive sandals, which are usual. Does some reader know which one is it?

Notice how, if you add all those vanguard Yamna findings of Central and Western Europe, including this one from southern Spain, you begin to get a good idea of the territories occupied by East Bell Beakers expanding later. More or less like vanguard Abashevo and Sintashta finds in the Zeravshan valley heralded the steppe-related Srubna-Andronovo expansions in Turan…

It doesn’t seem like Proto-Beaker and Yamna just “crossed paths” at some precise time around the Lower Danube, and Yamna men “switched cultures”. It seems that many Yamna vanguard groups, probably still in long-distance contact with Yamna settlers from the Carpathian Basin, were already settled in different European regions in the first half of the 3rd millennium BC, before the explosive expansion of East Bell Beakers ca. 2500 BC. As Heyd says, there are potentially many Yamna settlements along the Middle and Lower Danube and tributaries not yet found, connecting the Carpathian Basin to Western and Northern Europe.

These vanguard groups would have more easily transformed their weakened eastern Yamna connections with the fashionable Proto-Beaker package expanding from the west (and surrounding all of these loosely connected settlements), just like the Yamna materials from Seville probably represent a close cultural contact of Chalcolithic Iberia with a Yamna settlement (the closest known site with Yamna traits is near Alsace, where high Yamna ancestry is probably going to be found in a Bell Beaker R1b-L151 individual).

This does not mean that there wasn’t a secondary full-scale migration from the Carpathian Basin and nearby settlements, just like Corded Ware shows a secondary (A-horizon?) migration to the east with R1a-Z645. It just means that there was a complex picture of contacts between Yamna and European Chalcolithic groups before the expansion of Bell Beakers. Doesn’t seem genocidal enough for a popular movie, tho.

It is good practice to be registered and logged in to comment.
Please keep the discussion of this post on topic.
Civilized discussion. Academic tone.
For other topics, use the forums instead.
47 Comments
Oldest
Newest
Inline Feedbacks
View all comments