Interesting excerpts (emphasis mine, some links to images and tables deleted for clarity):

Late Bronze Age (LBA) Srubnaya-Alakulskaya individuals carried mtDNA haplogroups associated with Europeans or West Eurasians (17) including H, J1, K1, T2, U2, U4, and U5 (table S3). In contrast, the Iron Age nomads (Cimmerians, Scythians, and Sarmatians) additionally carried mtDNA haplogroups associated with Central Asia and the Far East (A, C, D, and M). The absence of East Asian mitochondrial lineages in the more eastern and older Srubnaya-Alakulskaya population suggests that the appearance of East Asian haplogroups in the steppe populations might be associated with the Iron Age nomads, starting with the Cimmerians. 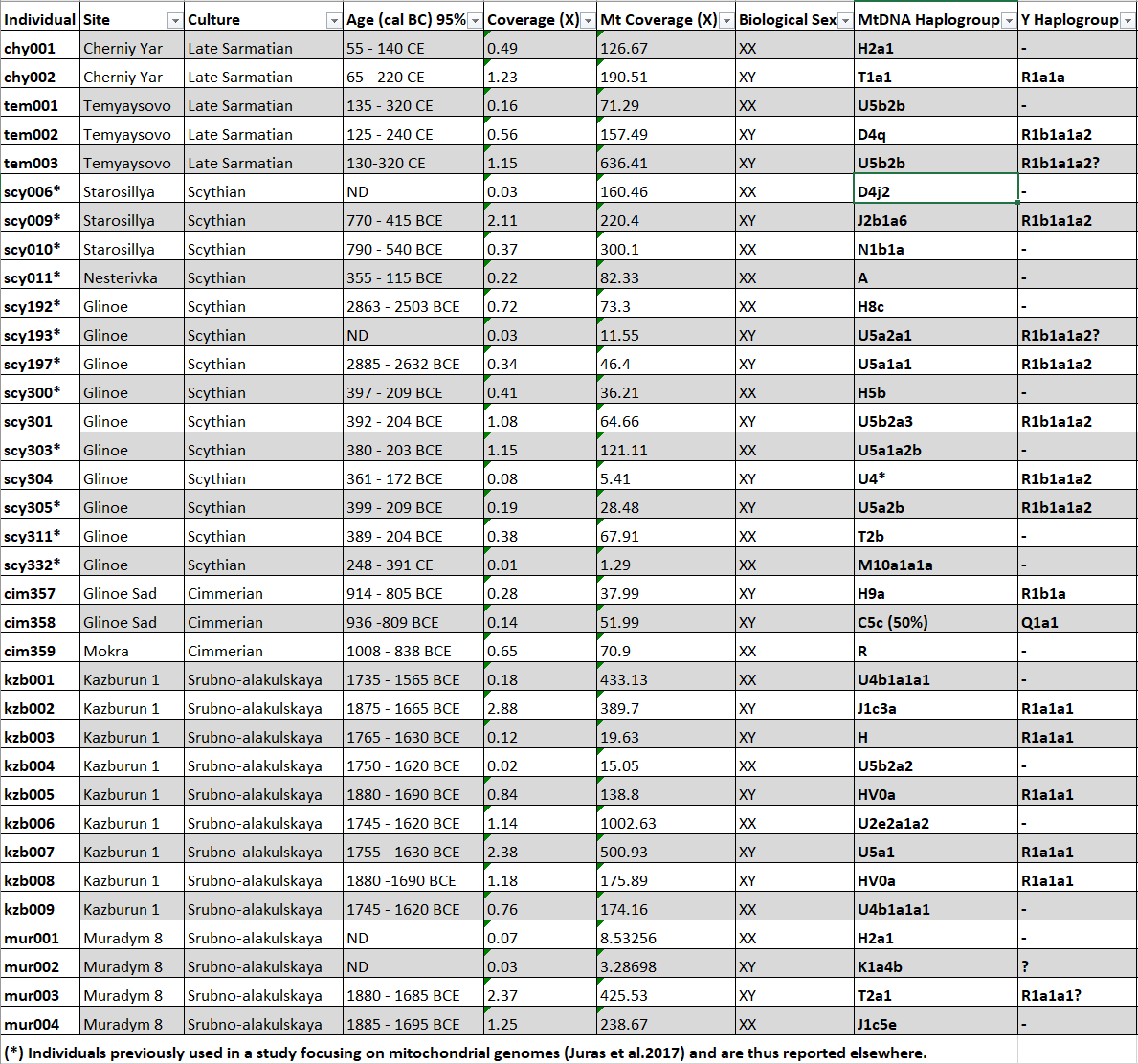 You can read here the Excel file with (some probably as speculative as the paper’s own) results.

The presence of an SA component (as well as finding of metals imported from Tien Shan Mountains in Muradym 8) could therefore reflect a connection to the complex networks of the nomadic transmigration patterns characteristic of seasonal steppe population movements. These movements, although dictated by the needs of the nomads and their animals, shaped the economic and social networks linking the outskirts of the steppe and facilitated the flow of goods between settled, semi-nomadic, and nomadic peoples. In contrast, all Cimmerians carried the Siberian genetic component. Both the PCA and f4 statistics supported their closer affinities to the Bronze Age western Siberian populations (including Karasuk) than to Srubnaya. It is noteworthy that the oldest of the Cimmerians studied here (cim357) carried almost equal proportions of Asian and West Eurasian components, resembling the Pazyryks, Aldy-Bel, and Iron Age individuals from Russia and Kazakhstan (12). The second oldest Cimmerian (cim358) was also the only one with both uniparental markers pointing toward East Asia. The Q1* Y chromosome sublineage of Q-M242 is widespread among Asians and Native Americans and is thought to have originated in the Altai Mountains (24)

In contrast to the eastern steppe Scythians (Pazyryks and Aldy-Bel) that were closely related to Yamnaya, the western North Pontic Scythians were instead more closely related to individuals from Afanasievo and Andronovo groups. Some of the Scythians of the western Pontic-Caspian steppe lacked the SA and the East Eurasian components altogether and instead were more similar to a Montenegro Iron Age individual (3), possibly indicating assimilation of the earlier local groups by the Scythians.

Toward the end of the Scythian period (fourth century CE), a possible direct influx from the southern Ural steppe zone took place, as indicated by scy332. However, it is possible that this individual might have originated in a different nomadic group despite being found in a Scythian cultural context.

I am surprised to find this new R1b-L23-based bottleneck in Eastern Iranian expansions so late, but admittedly – based on data from later times in the Pontic-Caspian steppe near the Caucasus – it was always a possibility. The fact that pockets of R1b-L23 lineages remained somehow ‘hidden’ in early Indo-Iranian communities was clear already since Narasimhan et al. (2018), as I predicted could happen, and is compatible with the limited archaeological data on Sintashta-Potapovka populations outside fortified settlements. I already said that Corded Ware was out of Indo-European migrations then, this further supports it.

Even with all these data coming just from a north-west Pontic steppe region (west of the Dnieper), these ‘Cimmerians’ – or rather the ‘Proto-Scythian’ nomadic cultures appearing before ca. 800 BC in the Pontic-Caspian steppes – are shown to be probably formed by diverse peoples from Central Asia who brought about the first waves of Siberian ancestry (and Asian lineages) seen in the western steppes. You can read about a Cimmerian-related culture, Anonino, key for the evolution of Finno-Permic peoples.

Also interesting about the Y-DNA bottleneck seen here is the rejection of the supposed continuous western expansions of R1a-Z645 subclades with steppe tribes since the Bronze Age, and thus a clearest link of the Hungarian Árpád dynasty (of R1a-Z2123 lineage) to either the early Srubna-related expansions or – much more likely – to the actual expansions of Hungarian tribes near the Urals in historic times.

NOTE. I will add the information of this paper to the upcoming post on Ugric and Samoyedic expansions, and the late introduction of Siberian ancestry to these peoples.

A few interesting lessons to be learned:

Do you smell that fresher air? It’s the Central and East European post-Communist populist and ethnonationalist bullshit (viz. pure blond R1a-based Pan-Nordicism / pro-Russian Pan-Slavism / Pan-Eurasianism, as well as Pan-Turanism and similar crap from the 19th century) going down the toilet with each new paper.

#EDIT (5 OCT 2018): It seems I was too quick to rant about the consequences of the paper without taking into account the complexity of the data presented. Not the first time this impulsivity happens, I guess it depends on my mood and on the time I have to write a post on the specific work day…

While the data on Srubna, Cimmerians, and Sarmatians shows clearer Y-DNA bottlenecks (of R1a-Z645 subclades) with the new data, the Scythian samples remain controversial, because of the many doubts about the haplogroups (although the most certain cases are R1b-Z2103), their actual date, and cultural attribution. However, I doubt they belong to other peoples, given the expansionist trends of steppe nomads before, during, and after Scythians (as shown in statistical analyses), so most likely they are Scythian or ‘Para-Scythian’ nomadic groups that probably came from the east, whether or not they incorporated Balkan populations. This is further supported by the remaining R1b-P312 and R1b-Z2103 populations in and around the modern Eurasian steppe region.

You can find an interesting and detailed take on the data published (in Russian) at Vol-Vlad’s LiveJournal (you can read an automatic translation from Google). I think that post is maybe too detailed in debunking all information associated to the supposed Scythians – to the point where just a single sample seems to be an actual Scythian (?!) -, but is nevertheless interesting to read the potential pitfalls of the study.