Here, we report the first genome-wide data of 10 ancient individuals from northeastern Xinjiang. They are dated to around 2,200 years ago and were found at the Iron Age Shirenzigou site. We find them to be already genetically admixed between Eastern and Western Eurasians. We also find that the majority of the East Eurasian ancestry in the Shirenzigou individuals is related to northeastern Asian populations, while the West Eurasian ancestry is best presented by ∼20% to 80% Yamnaya-like ancestry. Our data thus suggest a Western Eurasian steppe origin for at least part of the ancient Xinjiang population. Our findings furthermore support a Yamnaya-related origin for the now extinct Tocharian languages in the Tarim Basin, in southern Xinjiang.

The dominant mtDNA lineages of the Shirenzigou people are commonly found in modern and ancient West Eurasian populations, such as U4, U5, and H, while they also have East Eurasian-specific haplogroups A, D4, and G3, preliminarily documenting admixed ancestry from eastern and western Eurasia.

The admixture profile is also shown on the paternal Y chromosome side that 4 out of 6 males in Shirenzigou (Figure S2) belong to the West Eurasian-specific haplogroup R1b (n = 2) and East Eurasian-specific haplogroup Q1a (n = 2), the former is predominant in ancient Yamnaya and nearly 100% in Afanasievo, different from the Middle and Late Bronze Age Steppe groups (Steppe_MLBA) such as Andronovo, [Potapovka], Srubnaya, and Sintashta whose Y chromosomal haplogroup is mainly R1a.

We first carried out principal component analysis (PCA) to assess the genetic affinities of the ancient individuals qualitatively by projecting them onto present-day Eurasian variation (Figure 2). We observed a distinct separation between East and West Eurasians. Our ancient Shirenzigou samples and present-day populations from Central Asia and northwestern China form a genetic cline from East to West in the first PC. The distribution of Shirenzigou samples on the cline is relatively scattered with two major clusters, one being closer to modern-day Uygurs and Kazakhs and the other being closer to recently published ancient Saka and Huns from the Tianshan in Kazakhstan (…).

We applied a formal admixture test using f3 statistics in the form of f3 (Shirenzigou; X, Y) where X and Y are worldwide populations that might be the genetic sources for the Shirenzigou individuals. We observed the most significant signals of admixture in the Shirenzigou samples when using Yamnaya_Samara or Srubnaya as the West Eurasian source and some Northern Asians or Koreans as the East Eurasian source (Table S1). We also plotted the outgroup f3 statistics in the form of f3 (Mbuti; X, Anatolia_Neolithic) and f3 (Mbuti; X, Kostenki14) to visualize the allele sharing between population X and Anatolian farmers. As shown in Figure S3, the Steppe_MLBA populations including Srubnaya, Andronovo, and Sintashta were shifted toward farming populations compared with Yamnaya groups and the Shirenzigou samples. This observation is consistent with ADMIXTURE analysis that Steppe_MLBA populations have an Anatolian and European farmer-related component that Yamnaya groups and the Shirenzigou individuals do not seem to have. The analysis consistently suggested Yamnaya-related Steppe populations were the better source in modeling the West Eurasian ancestry in Shirenzigou.

We continued to use qpAdm to estimate the admixture proportions in the Shirenzigou samples by using different pairs of source populations, such as Yamnaya_Samara, Afanasievo, Srubnaya, Andronovo, BMAC culture (Bustan_BA and Sappali_Tepe_BA) and Tianshan_Hun as the West Eurasian source and Han, Ulchi, Hezhen, Shamanka_EN as the East Eurasian source. In all cases, Yamnaya, Afanasievo, or Tianshan_Hun always provide the best model fit for the Shirenzigou individuals, while Srubnaya, Andronovo, Bustan_BA and Sappali_Tepe_BA only work in some cases. The Yamnaya_Samara or Afanasievo-related ancestry ranges from ∼20% to 80% in different Shirenzigou individuals, consistent with the scattered distribution on the East-West cline in the PCA 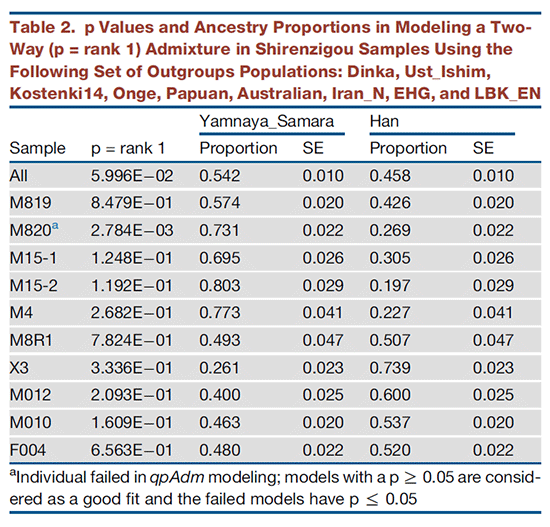 (…) we then modeled Shirenzigou as a three-way admixture of Yamnaya_Samara, Ulchi (or Hezhen) and Han to infer the source from the East Eurasia side that contributed to Shirenzigou. We found the Ulchi or Hezhen and Han-related ancestry had a complicated and unevenly distribution in the Shirenzigou samples. The most Shirenzigou individuals derived the majority of their East Eurasian ancestry from Ulchi or Hezhen-related populations, while the following two individuals M820 and M15-2 have more Han related than Ulchi/Hezhen-related ancestry.

One important question remains, though: how and when did these Proto-Tocharian speakers migrate from the Afanasevo culture in the Altai into the Tarim Basin? The traditional answer, now more likely than ever, is through the Chemurchek culture. See e.g. A re-analysis of the Qiemu’erqieke (Shamirshak) cemeteries, Xinjiang, China, by Jia and Betts JIES (2010) 38(4).

Also, given the apparent lack of (extra farmer ancestry that characterizes) Corded Ware ancestry, if the results were already suspicious before, how likely are now the published R1a(xZ93) and/or radiocarbon dates of the Xiaohe mummies from Li et al. (2010, 2015)? Because, after all, one should have expected in such a late date a generalized admixture with neighbouring Srubna/Andronovo-like populations.

It is good practice to be registered and logged in to comment.
Please keep the discussion of this post on topic.
Civilized discussion. Academic tone.
For other topics, use the forums instead.
14 Comments
Oldest
Newest
Inline Feedbacks
View all comments