This post should probably read “Consequences of Narasimhan et al. (2018),” too, since there seems to be enough data and materials published by the Copenhagen group in Nature and Science to make a proper interpretation of the data that will appear in their corrected tables.

The finding of late Khvalynsk/early Yamna migrations, identified with early LPIE migrants almost exclusively of R1b-L23 subclades is probably one of the most interesting findings in the recent papers regarding the Indo-European question.

Although there are still few samples to derive fully-fledged theories, they begin to depict a clearer idea of waves that shaped the expansion of Late Proto-Indo-European migrants in Eurasia during the 4th millennium BC, i.e. well before the expansion of North-West Indo-European, Palaeo-Balkan, and Indo-Iranian languages.

Like Anatolian, Tocharian has been described as having a more archaic nature than the rest of Late PIE. However, Pre-Tocharian belongs to the Late PIE trunk, clearly distinguishable phonetically and morphologically from Anatolian.

It is especially remarkable that – even though it expanded into Asia – it has more in common with North-West Indo-European, hence its classification (together with NWIE) as part of a Northern group, unrelated to Graeco-Aryan.

The linguistic supplement by Kroonen et al. accepts that peoples from the Afanasevo culture (ca. 3000-2500 BC) are the most likely ancestors of Tocharians.

NOTE. For those equating the Tarim Mummies (of R1a-Z93 lineages) with Tocharians, you have this assertion from the linguistic supplement, which I support:

An intermediate stage has been sought in the oldest so-called Tarim Mummies, which date to ca. 1800 BCE (Mallory and Mair 2000; Wáng 1999). However, also the language(s) spoken by the people(s) who buried the Tarim Mummies remain unknown, and any connection between them and the Afanasievo culture on the one hand or the historical speakers of Tocharian on the other has yet to be demonstrated (cf. also Mallory 2015; Peyrot 2017).

These are are the recent samples that could, with more or less certainty, correspond to migration waves from late Khvalynsk (or early Yamna), from oldest to most recent:

NOTE. A proper evaluation with further samples from Narasimhan et al. (2018) is necessary, though, before we can assert a late Khvalynsk origin of this ancestry.


NOTE 2. I proposed that we could find R1b-L51 in Afanasevo, presupposing the development of R1b-L51 and R1b-Z2103 lineages with separating clans, and thus with dialectal divisions. While finding this is still possible within Khvalynsk regions, it seems we will have a division of these lineages already ca. 4250-4000 BC, which would require a closer follow-up of the different inner late Khvalynsk groups and their samples. For the moment, we don’t have a clear connection through lineages between North-West Indo-European groups and Tocharian.

NOTE. A new radiocarbon dating of I2327 is expected, to correct the currently available date of 5900-5000 BC. Since it clusters nearer to Chalcolithic samples from the site than I4243 (from the same archaeological site), it is possible that both are part of similar groups receiving admixture around this period, or maybe I2327 is from a later period, coinciding with the Iron Age sample F38 from Iran (Broushaki et al. 2016), with which it closely clusters. Also, the finding of EHG-related ancestry in Maykop samples dated ca. 3700-3000 BC (maybe with R1b-L23 subclades) offers another potential source of migrants for this Iranian group.

NOTE. Samples from Narasimhan et al. (2018) still need to be published in corrected tables, which may change the actual subclades shown here.

These late Khvalynsk / early Yamna migration waves into Asia are quite early compared to the Indo-Iranian migrations, whose ancestors can only be first identified with Volga-Ural groups of Yamna/Poltavka (ca. 3000-2400 BC), with its fully formed language expanding only with MLBA waves ca. 2300-1200 BC, after mixing with incoming Abashevo migrants.

While the authors apparently forget to reference the previous linguistic theories whereby Tocharian is more archaic than the rest of Late PIE dialects, they refer to the ca. 1,000-year gap between Pre-Tocharian and Proto-Indo-Iranian migrations, and thus their obvious difference:

The fact that Tocharian is so different from the Indo-Iranian languages can only be explained by assuming an extensive period of linguistic separation.

What Gordon Whittaker proposes is a North-West Indo-European-related substratum in Sumerian language and texts ca. 3500 BC, which may explain some non-Sumerian, non-Semitic word forms. It is just one of many theories concerning this substratum.

This is a summary of his findings from his latest writing on the subject (a chapter of a book on Indo-European phonetics, from the series Copenhagen Studies in Indo-European):

In Sumerian and Akkadian vocabulary, the cuneiform writing system, and the names of deities and places in Southern Mesopotamia a body of lexical material has been preserved that strongly suggests influence emanating from a superstrate of Indo-European origin. his Indo-European language, which has been given the name Euphratic, is, at present, attested only indirectly through the filters of Sumerian and Akkadian. The attestations consist of words and names recorded from the mid-4th millennium BC (Late Uruk period) onwards in texts and lexical lists. In addition, basic signs that originally had a recognizable pictorial structure in proto-cuneiform preserve (at least from the early 3rd millennium on) a number of phonetic values with no known motivation in Sumerian lexemes related semantically to the items depicted. This suggests that such values are relics from the original logographic values for the items depicted and, thus, that they were inherited from a language intimately associated with the development of writing in Mesopotamia. Since specialists working on proto-cuneiform, most notably Robert K. Englund of the Cuneiform Digital Library Initiative, see little or no evidence for the presence of Sumerian in the corpus of archaic tablets, the proposed Indo-European language provides a potential solution to this problem. It has been argued that this language, Euphratic, had a profound influence on Sumerian, not unlike that exerted by Sumerian and Akkadian on each other, and that the writing system was the primary vehicle of this influence. he phonological sketch drawn up here is an attempt to chart the salient characteristics of this influence, by comparing reconstructed Indo-European lexemes with similarly patterned ones in Sumerian (and, to a lesser extent, in Akkadian).

His original model, based on phonetic values in basic proto-cuneiform signs, is quite imaginative and a very interesting read, if you have the time. His Academia.edu account hosts most of his papers on the subject.

We could speculate about the potential expansion of this substrate language with the commercial contacts between Uruk and Maykop (as I did), now probably more strongly supported because of the EHG found in Maykop samples.

NOTE. We could also put it in relation with the Anatolian language of Mari, but this would require a new reassessment of its North-West Indo-European nature.

Nevertheless, this theory is far from being mainstream, anywhere. At least today.

NOTE. The proposal remains still hypothetic, because of the flaws in the Indo-European parallels – similar to Koch’s proposal of Indo-European in Tartessian inscriptions. A comprehensive critic approach to the theory is found in Sylvie Vanséveren’s A “new” ancient Indo-European language? On assumed linguistic contacts between Sumerian and Indo-European “Euphratic”, in JIES (2008) 36:3&4.

References to Gutian are popping up related to the Hajji Firuz samples of the mid-3rd millennium.

The hypothesis was put forward by Henning (1978) in purely archaeological terms.

This is the relevant excerpt from the book:

(…) Comparativists have asserted that, in spite of its late appearance, Tokharian is a relatively archaic form of Indo-European.3 This claim implies that the speakers of this group separated from their Indo-European brethren at a comparatively early date. They should accordingly have set out on their migrations rather early, and should have appeared within the Babylonian sphere of influence also rather early. Earlier, at any rate, than the Indo-Iranians, who spoke a highly developed (therefore probably later) form of Indo-European. Moreover, as some of the Indo-Iranians after their division into Iranians and Indo-Aryans4 appeared in Mesopotamia about 1500 B.C., we should expect the Proto-Tokharians about 2000 B.C. or even earlier.

If, armed with these assumptions as our working hypothesis, we look through the pages of history, we find one nation – one nation only – that perfectly fulfills all three conditions, which, therefore, entitles us to recognize it as the “Proto-Tokharians”. Tis name was Guti; the intial is also spelled with q (a voiceless back velar or pharyngeal), but the spelling with g is the original one. The closing -i is part of the name, for the Akkadian case-endings are added to it, nom. Gutium etc. Guti (or Gutium, as some scholars prefer) was valid for the nation, considered as an entity, but also for the territory it occupied.
(…).

The text goes on to follow the invasion of Babylonia by the Guti, and further eastward expansions supposedly connected with these, to form the attested Tocharians.

Among the Gutian rulers is one Elulumesh, whose name is evidently Akkadian Elulum slightly “Gutianized” by the Gutian case(?) ending -eš.40 This Gutian ruler Elulum is obviously the same man whom we find participating in the scramble for power after the death of Shar-kali-sharrii; his name appears there in Sumerian form without mimation as Elulu.

The Gutian dynasty, from ca. 22nd c. BC appears as follows: 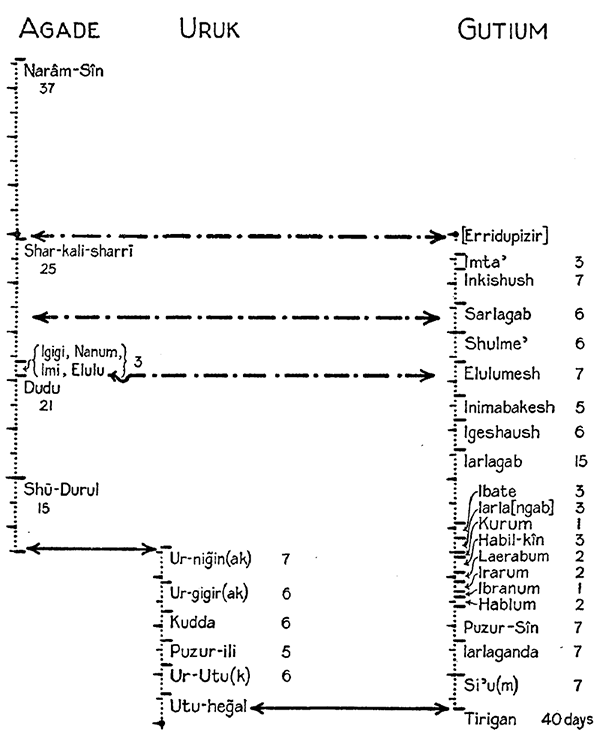 I don’t think we could derive a potential relation to any specific Indo-European branch from this simple suffix repeated in Gutian rulers, though.

The hypothesis of the Tocharian-like nature of the Guti (apart from the obvious error of considering them as the ancestors of Tocharians) remains not contrasted in new works since. It was cited e.g. by Gamkrelidze and Ivanov (1995) to advance their Armenian homeland, and by Mallory and Adams in their Encyclopedia (1997).

It lies therefore in the obscurity of undeveloped archaeological-linguistic hypotheses, and its connection with the attested R1b-Z2103 samples from Iran is not (yet) warranted.

It is good practice to be registered and logged in to comment.
Please keep the discussion of this post on topic.
Civilized discussion. Academic tone.
For other topics, use the forums instead.
38 Comments
Oldest
Newest
Inline Feedbacks
View all comments