I will post information on ISBA 8 sesions today as I see them on Twitter (see programme in PDF, and sessions from yesterday).

Exploring the genomic impact of colonization in north-eastern Siberia, by Seguin-Orlando et al.

Yakutia is the coldest region in the northern hemisphere, with winter record temperatures below minus 70°C. The ability of Yakut people to adapt both culturally and biologically to extremely cold temperatures has been key to their subsistence. They are believed to descend from an ancestral population, which left its original homeland in the Lake Baykal area following the Mongol expansion between the 13th and 15th centuries AD. They originally developed a semi-nomadic lifestyle, based on horse and cattle breeding, providing transportation, primary clothing material, meat, and milk. The early colonization by Russians in the first half of the 17th century AD, and their further expansion, have massively impacted indigenous populations. It led not only to massive epidemiological outbreaks, but also to an important dietary shift increasingly relying on carbohydrate-rich resources, and a profound lifestyle transition with the gradual conversion from Shamanism to Christianity and the establishment of new marriage customs. Leveraging an exceptional archaeological collection of more than a hundred of bodies excavated by MAFSO (Mission Archéologique Française en Sibérie Orientale) over the last 15 years and naturally kept frozen by the extreme cold temperatures of Yakutia, we have started to characterize the (epi)genome of indigenous individuals who lived from the 16th to the 20th century AD. Current data include the genome sequence of approximately 50 individuals that lived prior to and after Russian contact, at a coverage from 2 to 40 fold. Combined with data from archaeology and physical anthropology, as well as microbial DNA preserved in the specimens, our unique dataset is aimed at assessing the biological consequences of the social and biological changes undergone by the Yakut people following their neolithisation by Russian colons.

preliminary conclusions: no detectable impact of Russian colonization on Yakut oral microbiome diversity despite dietary and other societal changes (but perhaps calculus not adequately sensitive) pic.twitter.com/oO2OjqIHKg

Ancient DNA from a Medieval trading centre in Northern Finland

Using ancient DNA to identify the ancestry of individuals from a Medieval trading centre in Northern Finland, by Simoes et al.

Analyzing genomic information from archaeological human remains has proved to be a powerful approach to understand human history. For the archaeological site of Ii Hamina, ancient DNA can be used to infer the ancestries of individuals buried there. Situated approximately 30 km from Oulu, in Northern Finland, Ii Hamina was an important trade place since Medieval times. The historical context indicates that the site could have been a melting pot for different cultures and people of diversified genetic backgrounds. Archaeological and osteological evidence from different individuals suggest a rich diversity. For example, stable isotope analyses indicate that freshwater and marine fish was the dominant protein source for this population. However, one individual proved to be an outlier, with a diet containing relatively more terrestrial meat or vegetables. The variety of artefacts that was found associated with several human remains also points to potential differences in religious beliefs or social status. In this study, we aimed to investigate if such variation could be attributed to different genetic ancestries. Ten of the individuals buried in Ii Hamina’s churchyard, dating to between the 15th and 17th century AD, were screened for presence of authentic ancient DNA. We retrieved genome-wide data for six of the individuals and performed downstream analysis. Data authenticity was confirmed by DNA damage patterns and low estimates of mitochondrial contamination. The relatively recent age of these human remains allows for a direct comparison to modern populations. A combination of population genetics methods was undertaken to characterize their genetic structure, and identify potential familiar relationships. We found a high diversity of mitochondrial lineages at the site. In spite of the putatively distant origin of some of the artifacts, most individuals shared a higher affinity to the present-day Finnish or Late Settlement Finnish populations. Interestingly, different methods consistently suggested that the individual with outlier isotopic values had a different genetic origin, being more closely related to reindeer herding Saami. Here we show how data from different sources, such as stable isotopes, can be intersected with ancient DNA in order to get a more comprehensive understanding of the human past.

.@LucianaGSimoes presenting her poster on #aDNA from Finland at #ISBA8 today pic.twitter.com/Ue5GkuHerP

A closer look at the bottom left corner of the poster (the left columns are probably the new samples): 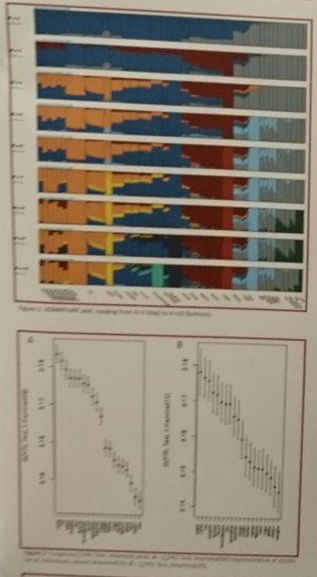 Plant resources processed in HG pottery from the Upper Volga

Multiple criteria for the detection of plant resources processed in hunter-gatherer pottery vessels from the Upper Volga, Russia, by Bondetti et al.

In Northern Eurasia, the Neolithic is marked by the adoption of pottery by hunter-gatherer communities. The degree to which this is related to wider social and lifestyle changes is subject to ongoing debate and the focus of a new research programme. The use and function of early pottery by pre-agricultural societies during the 7th-5th millennia BC is of central interest to this debate. Organic residue analysis provides important information about pottery use. This approach relies on the identification and isotopic characteristics of lipid biomarkers, absorbed into the pores of the ceramic or charred deposits adhering to pottery vessel surfaces, using a combined methodology, namely GC-MS, GC-c-IRMS and EA-IRMS. However, while animal products (e.g., marine, freshwater, ruminant, porcine) have the benefit of being lipid-rich and well-characterised at the molecular and isotopic level, the identification of plant resources still suffers from a lack of specific criteria for identification. In huntergatherer contexts this problem is exacerbated by the wide range of wild, foraged plant resources that may have been potentially exploited. Here we evaluate approaches for the characterisation of terrestrial plant food in pottery through the study of pottery assemblages from Zamostje 2 and Sakhtysh 2a, two hunter-gatherer settlements located in the Upper Volga region of Russia.

GC-MS analysis of the lipids, extracted from the ceramics and charred residues by acidified methanol, suggests that pottery use was primarily oriented towards terrestrial and aquatic animal products. However, while many of the Early Neolithic vessels contain lipids distinctive of freshwater resources, triterpenoids are also present in high abundance suggesting mixing with plant products. When considering the isotopic criteria, we suggest that plants were a major commodity processed in pottery at this time. This is supported by the microscopic identification of Viburnum (Viburnum Opulus L.) berries in the charred deposits on several vessels from Zamostje.

The study of Upper Volga pottery demonstrated the importance of using a multidisciplinary approach to determine the presence of plant resources in vessels. Furthermore, this informs the selection of samples, often subject to freshwater reservoir effects, for 14C dating.

Studies on hunter-gatherer pottery – appearing in eastern Europe before Middle Eastern Neolithic pottery – may be important to understand the arrival of R1a-M17 lineages to the region before ca. 7000 BC. Or not, right now it is not very clear what happened with R1b-P297 and R1a-M17, and with WHG—EHG—ANE ancestry…

Bronze Age population dynamics and the rise of dairy pastoralism on the eastern Eurasian steppe, by Warinner et al.

Recent paleogenomic studies have shown that migrations of Western steppe herders (WSH), beginning in the Eneolithic (ca. 3300-2700 BCE), profoundly transformed the genes and cultures of Europe and Central Asia. Compared to Europe, the eastern extent of this WSH expansion is not well defined. Here we present genomic and proteomic data from 22 directly dated Bronze Age khirigsuur burials from Khövsgöl, Mongolia (ca. 1380-975 BCE). Only one individual showed evidence of WSH ancestry, despite the presence of WSH populations in the nearby Altai-Sayan region for more than a millennium. At the same time, LCMS/ MS analysis of dental calculus provides direct protein evidence of milk consumption from Western domesticated livestock in 7 of 9 individuals. Our results show that dairy pastoralism was adopted by Bronze Age Mongolians despite minimal genetic exchange with Western steppe herders.

Comments on ancestry of the Deer Stone-Khirigsuur ancestry; one “eastern” outlier and a (late) “western” outlier – but in the main only low (2-7%) levels of western admixture (of “Sintashta” and not “Afanasievo” type) pic.twitter.com/9E3jCQKTlm

Detail of the images: 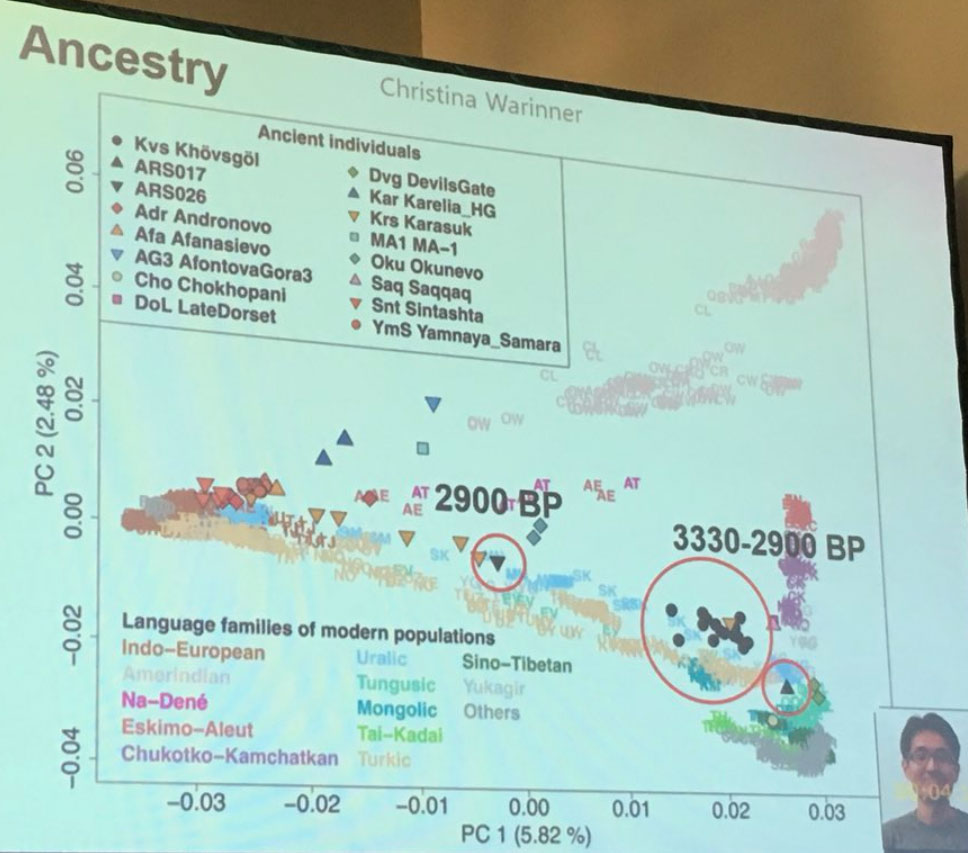 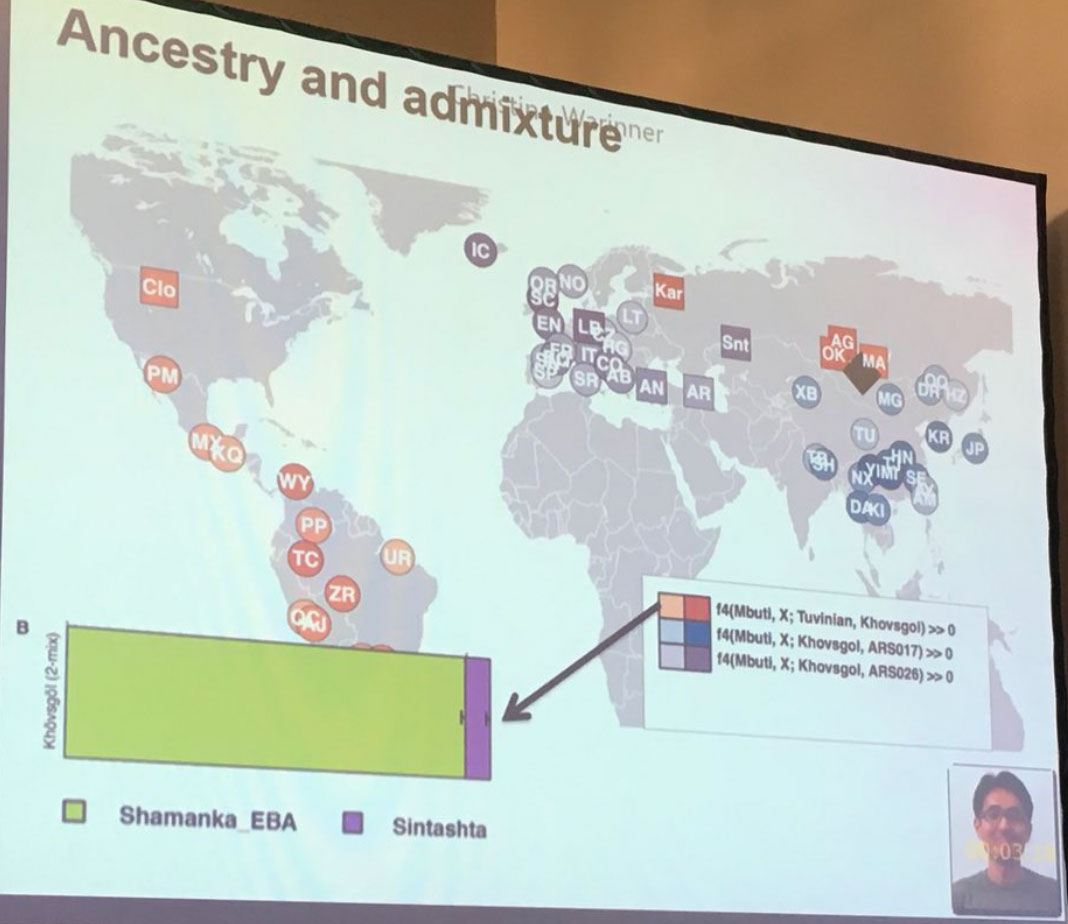 It is good practice to be registered and logged in to comment.
Please keep the discussion of this post on topic.
Civilized discussion. Academic tone.
For other topics, use the forums instead.
2 Comments
Oldest
Newest
Inline Feedbacks
View all comments