We produced whole-genome sequence data from 40 ancient individuals spanning from the Late Upper Paleolithic to the Medieval era and representing five distinct administrative regions in the Russian Federation encompassing Yakutia, Trans-Baikal, Cis-Baikal, Krasnoyarsk Krai, and Amur Oblast (…) All individuals were accredited to either Y macro-haplogroup Q or N and non-African mitochondrial macrohaplogroups of M, N, and R.

Population dynamics during and after the LGM in northeast Asia

We sequenced ancient DNA from a deciduous tooth of a c.16,900-year-old subadult female (Khaiyrgas-1) excavated from the upper layer of the Paleolithic horizon of the Khaiyrgas Cave to investigate the post-LGM population dynamics in northeast Asia. This individual is one the first known post-LGM representatives of the settlers of the Central Siberian Plateau. Human groups geographically represented by this individual retracted from the area during the Bølling-Allerød warming period dated to c.15,000 to 13,000 cal BP.

Khaiyrgas-1 exhibited genetic affinity toward present-day Selkups, a north Siberian Uralic-speaking population, on the PCA. (…) On the basis of K = 14 ancestral components, a genetic component that is maximized in the present-day Nganasan population from northeast Asia (yellow) and another component that is maximized in the present-day Native America populations (purple) were present at high levels in the genome of Khaiyrgas-1 compared to other Upper Paleolithic individuals from Eurasia and Asia.

Population transformations across Yakutia and the origins of the Paleo-Inuits

(…) we analyzed chronological genome sequence data from the Lena and Kolyma river regions of Yakutia. These data included a ~6800-year-old individual associated with the Syalakh cultural complex (Matta-1), a ~6200-year-old individual associated with the Belkachi cultural complex (Onnyos-1), and seven individuals dated to c.4780 to 2490 cal BP. The PCA revealed a west-east genetic cline extending from the Late Upper Paleolithic to the Iron Age and the presence of three major genetic changes during this period throughout Lena and Kolyma regions. These include a shift ~9800 years ago between the Late Upper Paleolithic and Mesolithic, another one ~6800 years ago between the Mesolithic and Early/Middle Neolithic, and ~4700 years ago between Early/Middle Neolithic and Late Neolithic/Iron Age.

Matta-1 and Onnyos-1 formed a distinct group (Yakutia_Lena_6850_6190_BP) on the PCA between Khaiyrgas-1, Kolyma_M (5), and a group of succeeding individuals (Yakutia_Lena_Kolyma_4780_2490_BP). The Bronze Age (c.4280 to 4085 BP) individual (kra001) from the Krasnoyarsk Krai grouped with Yakutia_Lena_Kolyma_4780_2490_BP. Yakutia_Lena_6850_6190_BP and Yakutia_Lena_Kolyma_4780_2490_BP exhibited genetic affinities toward present-day northeast Asia populations. ADMIXTURE analysis revealed a pattern of increase in northeast Asia–related and a pattern of decrease in Native America–related genetic ancestry from the Late Upper Paleolithic to the Iron Age. Consistently, Devil’s Cave individuals representing the East Asian ancestry and the Anzick-1 individual representing the Native American ancestry shared more alleles with the succeeding and preceding groups, respectively, implying the presence of gene flow into the Lena and Kolyma regions from Far Eastern sources during the Neolithic and the Bronze Age.

Origins and interactions of the Baikal populations

(…) our data revealed multiple population transformations across the Cis-Baikal area spanning a time transect between ~8980 and ~560 years ago: An ~8980-year-old Cis-Baikal individual, Popovskij-1, falls within the genetic variation of the Trans-Baikal_8345_3000_BP. Popovskij-1 shared more drift with the Trans-Baikal_8345_3000_BP compared to the other ancient groups, suggesting the presence of a uniform gene pool across the area ~8900 years ago. A ~7900-year-old individual (Cyclodrome-1) marked the first genetic shift around the Cis-Baikal region, and this individual together with individuals spanning from ~7200 to ~6200 years ago (Cis-Baikal_7200_6200_BP) formed a distinct genetic group on the PCA. Yet, Cis-Baikal individuals spanning 6100 to 3700 years ago formed another group (Cis-Baikal_6100_3700_BP), carrying comparably high amount of west Eurasia–related and low amount of northeast Asia–related components. A Medieval Cis-Baikal individual (c.670 to 550 cal BP) was genetically distinct from the other individuals with increased genetic affinities toward East Asia populations. Y haplogroup distribution was in agreement with the observed genetic groupings. 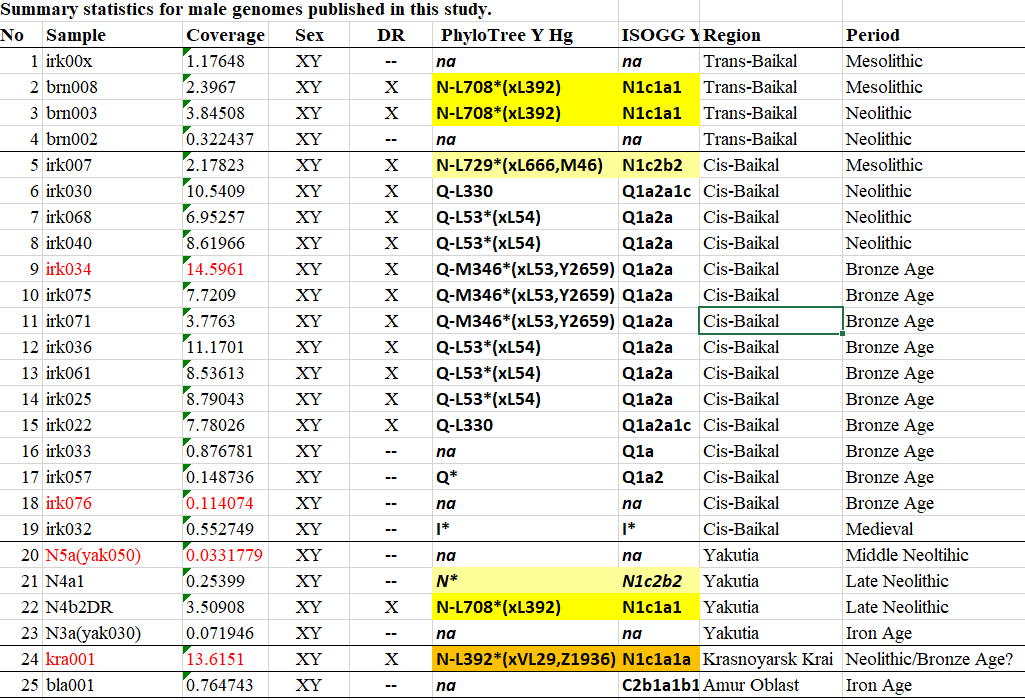 NOTE. Even though the most parsimonious interpretation – as suggested by the paper’s visual chronological data – is that these strains are related to the expansion of Afanasievo (due to the oldest Y. pestis genomes being found in Rise509 and Rise511, from Afanasievo Gora) as far as I can see the paper lacks a proper phylogenetic tree of the samples, as found e.g. in Rascovan et al. Cell (2018).

NOTE. As of the time of this post, files have not been posted yet to ENA for a proper check, though. The mtDNA haplogroup for this and other samples were reported in the previous paper by Kılınç et al. Sci. Rep. (2018), and were further refined by YFull, as can be seen from the Ancient DNA Dataset.

#EDIT (1/11/2021): Files have been uploaded, and you can take a look at the Y-SNP calls and their interpretation here.

Regarding this site from the Yenisei river basin, it seems to be formed by (at least) two different archaeological layers, one LN/EBA, the other MBA. Given the reported radiocarbon dating, burial 1 might belong to earlier, Glazkovo-related strata, immediately before the arrival of Uralic-speaking Karasuk population. A recent summary of the available literature is found in Slepchenko et al. (2017):

Nefteprovod I and the adjacent Nefteprovod II burial grounds were excavated as part of a salvage project at the Anzhevsk archaeological site. This site is located near the former Anzhevka settlement on the right bank of the Kan River southeast of Kansk in the Krasnoyarsk region (…) Although the recovered artefact styles have no direct analogies, similar bronze and bone artefacts and ceramic vessels are found along the middle Yenisei River and date to the Late Bronze Age. Based on these artefact similarities and the burial style, the Nefteprovod I and II burial grounds likely belong to the Karasuk culture, which succeeded the Andronovo culture in this region during the later portion of the second millennium BC. The Karasuk culture lasted from approximately 1500 to 800 BC.

Burial #13 from the Nefteprovod II archeological site differed considerably from the other burials in its funerary style. The body was tightly flexed inside a tight burial pit with uneven margins. Grave goods were absent. The stonework overlaying the burial dated back to the Late Bronze Age, indicating that the burial came from earlier cultural strata, likely the middle Bronze Age (2000 to 1000 BC). The positioning of the body in a foetal position is unique in the region of the Kansk forest steppe. Similar burials under stonework have been found in adjacent territories of the Baikal and Angara regions, and they are associated with the Glazkovskaya culture, which dated from 2000 to 1300 BC. (Okladnikov 1975a, 1975b, Dudarёk & Lohov 2014, Derevianko et al. 2015). Tightly flexed burials were also part of the Andronovskaya culture from the Minusinsk Basin (Maksimenkov 1978).

It should come as no surprise by now to the readers of this blog that different waves of expansion of N-Tat lineages spread from around Lake Baikal. In fact, the earliest N-Tat sample known to date comes from the Trans-Baikal region, as recently reported by Ning et al. 2020 (which I referenced here).

Most known N-Tat subclades appearing in ancient samples to the west of Siberia appear therefore to be connected one way or another with westward waves of (mainly “Altaic”- or Iranian-speaking) forest-steppe- or steppe-related populations ultimately linked to the Circum-Baikal area, as explained in some of the posts listed below. In fact, the only earlier wave whose origin remained unexplained, of Palaeo-Laplandic-speaking MBA Lovozero-related BOO individuals, will probably be now easily explained as a migration linked to this early bottlenecked Cis-Baikal Yakutia_Lena_Kolyma_4780_2490_BP group, to which kra001 belongs.