Open access paper The deviant typological profile of the Tocharian branch of Indo-European may be due to Uralic substrate influence by Peyrot, Indo-European Linguistics (2019).

NOTE. This seems to be part of the master’s thesis by Abel Warries, but the paper is authored only by Peyrot.

The loss in Tocharian of the Proto-Indo-European obstruent distinctions conventionally noted as voice and aspiration is a very strong indication of foreign influence. Since Proto-Indo-European roots mostly have at least one stop, and often two, the merger of all three stop series into one must have led to massive homonymy and subsequently to heavy restructuring of the lexicon. It is difficult to see how these changes could be motivated language-internally. 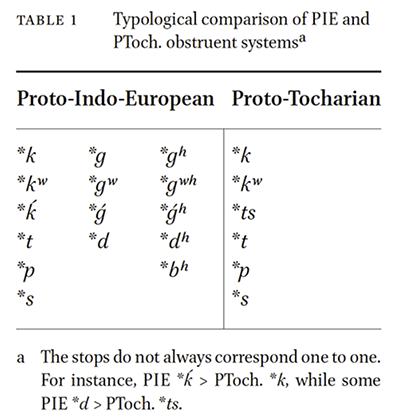 It is this innovative typological feature of Tocharian that is the strongest indication of Uralic influence (cf. e.g. Bednarczuk 2015:56). A single stop series as found in Tocharian is reconstructed for Proto-Uralic as well as for Proto-Samoyedic, while other possibly relevant languages all show a system with a contrast between voiced and unvoiced stops, i.e. Proto-Yeniseian, Old Iranian and Yukaghir, or, in Proto-Turkic, a contrast between strong and weak obstruents (see also below). 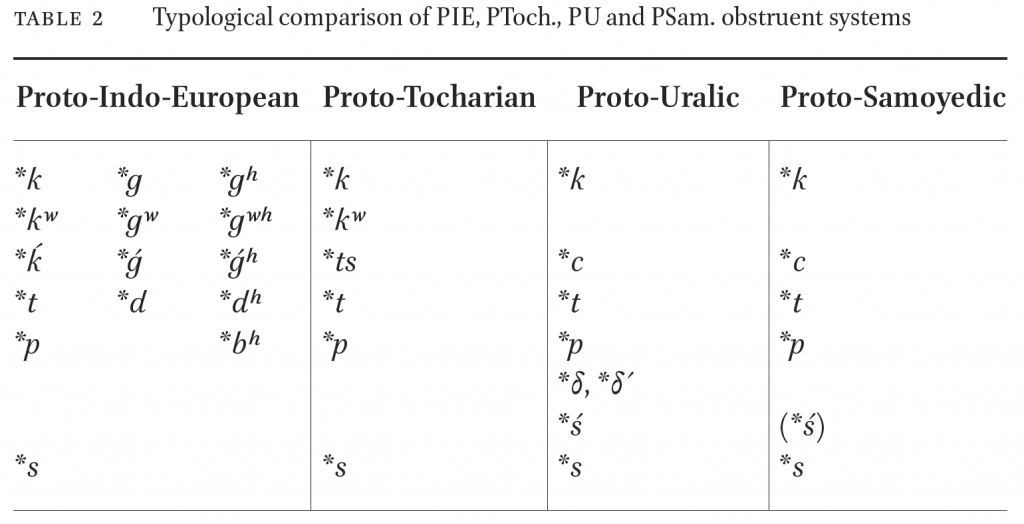 Interestingly, from the perspective of a two-velar series reconstructed for the parent Late Proto-Indo-European, Tocharian shows thus a satemization trend and Uralic influence similar to (but qualitatively different than) the one seen in Balto-Slavic and Indo-Iranian, probably due to the less marked population replacement evidenced by the continuity of Afanasievo-related ancestry among Iron Age Common Tocharians.

The basic vowel changes from Proto-Indo-European to Proto-Tocharian are the following (Ringe 1996; Hackstein 2017): 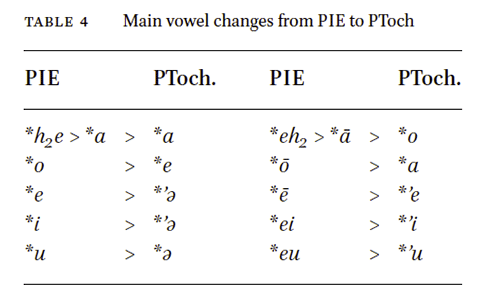 It is the seven-vowel system of Pre-Proto-Tocharian stage 5 above that is structurally identical to the South Siberian system represented by Ket. According to Vajda (2004:5), Ket ɨ and ə are further back than IPA central [ɨ] and [ə], but not as far back as the unrounded back vowels [ɯ] and [ɤ] of IPA. The allophonic variation in the mid vowels e, ə, o is correlated with tone: they are pronounced as high-mid [e, ə, o] with high-even tone, and as low-mid [ɛ, ʌ, ɔ] elsewhere (Vadja l.c.).

Obviously, this parallel with Ket can only be meaningful for Tocharian linguistic prehistory if the same vowel system can be reconstructed for earlier stages. Indeed, Vajda assumes an original Pre-Proto-Yeniseian five-vowel system with i, a, ʌ, o, u that was in Common Yeniseian enlarged with *e and *ɨ (2010:78–79).

Of the eleven vowels reconstructed for Proto-Samoyedic by Janhunen and Sammallahti, the following arose in the course of Pre-Proto-Samoyedic:

Since these four vowels arose secondarily, the following seven-vowel system can be assumed for a very early stage of Pre-Proto-Samoyedic. This system is structurally identical to the system of Ket and to that reconstructed for Pre-Proto-Tocharian:

It is attractive to think that the imbalances of the Yukaghir vowel system and vowel harmony reflect the adaptation of an original system with front rounded *ü and *ö to a system very similar to that seen in Yeniseian, Pre-Proto-Samoyedic and Pre-Proto-Tocharian.

Although other Indo-European languages also occasionally show agglutinative case markers, one of the most striking typological characteristics of Tocharian are the agglutinative so-called “secondary” cases. It is obvious that for such a major shift in language type substrate influence must be considered as a serious option.

The key to identifying the model of the Tocharian case system is to be found in the functions of the cases. On the functional level, the Tocharian case system shows the following non-Indo-European peculiarities: it lacks a dative, whose functions are fulfilled by the genitive; and it has a local case termed “perlative” which denotes movement along, through or over something, as well as a comitative case denoting accompaniment.

Another interesting functional phenomenon is the lack of a dative in Tocharian. Here the best match is offered by Uralic, where nominative, accusative and genitive are generally analysed as being the “grammatical cases,” while the remaining cases are the “local cases.”

Tocharian, in spite of its comitative, agrees better with the Samoyedic case system than with the more elaborate sets of e.g. Finnish and Hungarian: there is no inessive : adessive or ablative : elative contrast. The Ket system, too, is more elaborate than the Tocharian set.

Evaluation and interpretation of the parallels

I consider the evidence from the stop system (§ 2.1), the vowel system (§ 2.2) and the agglutinative case system (§ 2.3) as the strongest indications of language contact. The Tocharian stop system with only voiceless stops is the best evidence for Uralic influence. The vowel system shows neat parallels with Yeniseian and Pre-Proto-Samoyedic. Taken together, this suggests that the Uralic variety with which Tocharian was in contact was a form of Pre-Proto-Samoyedic. Agglutinative case systems are widely found in Siberia and Eastern Central Asia, but the case functions, in particular the Tocharian perlative, best match Uralic and comparable systems in South Siberia.

The perlative is the strongest indication of Siberian, and most probably Uralic or Pre-Proto-Samoyedic influence. A similar local case is widely found across Uralic and in Samoyedic, and also in Yukaghir and Ket, but not in Turkic.

The author ends by trying to fit the relative chronology of a Samoyedic and Tocharian spread from the Cis-Urals with the ideas set forth (mainly) by the Copenhagen group, with which he has participated in the past interpreting their results from a linguistic perspective. Hence the difficulties in finding potentially fitting settings to the proposed contacts.

I think it is self-evident that the push of the Abashevo-related, Seima-Turbino-mediated Andronovo-like cultural horizon perfectly explains the expansion of Pre-Proto-Samoyedic into the previous Afanasievo territory, strongly influencing the Chemurchek and related populations that most likely represent the evolving Tocharian-speaking community.

My recent video of expansion of Indo-Europeans illustrates this linguistic evolution quite accurately (although, admittedly, I didn’t put much effort in the maps to follow Palaeosiberian languages).

The finding of Afanasievo-like population in Iron Age Tian Shan, including haplogroup replacement (among them hg. R1a-M417, proper of Disintegrating Uralians), as well as the finding of R1a-Z645 subclades up to the Deer Stone-Khirigsuur Complex in northern Mongolia, confirms this setting of a sudden expansion of (originally) Uralic-speaking populations through northern Eurasia up to Lake Baikal, disrupting the Afanasievo-like Tocharian-speaking community.

Similarly, the highly divergent genetic make-up of the Samoyedic population relative to other Uralic groups is consistent with the dilution of their typically Uralic Corded Ware ancestry among Siberian populations, on top of the multiple acculturation events of traditionally multilingual North Siberian populations (especially among Northern Samoyeds, similar to other Circum-Arctic groups).

This paper is not the first, and certainly not the last to confirm strong language contacts between Uralic and Indo-European dialects with the previous native speakers of Siberia, such as Palaeosiberians and Altaic peoples, causing the aberrant (but seemingly closely related) traits of Samoyedic and Tocharian, proper of European languages introduced into an area foreign to Indo-Uralic languages.