Interesting excerpts (emphasis mine, some references deleted for clarity):

The town of Sigtuna in eastern central Sweden was one of the pioneer urban hubs in the vast and complex communicative network of the Viking world. The town that is thought to have been royally founded was planned and organized as a formal administrative center and was an important focal point for the establishment of Christianity [19]. The material culture in Sigtuna indicates that the town had intense international contacts and hosted several cemeteries with a Christian character. Some of them may have been used by kin-based groups or by people sharing the same sociocultural background. In order to explore the character and magnitude of mobility and migration in a late Viking Age town, we generated and analyzed genomic (n = 23) and strontium isotope (n = 31) data from individuals excavated in Sigtuna. 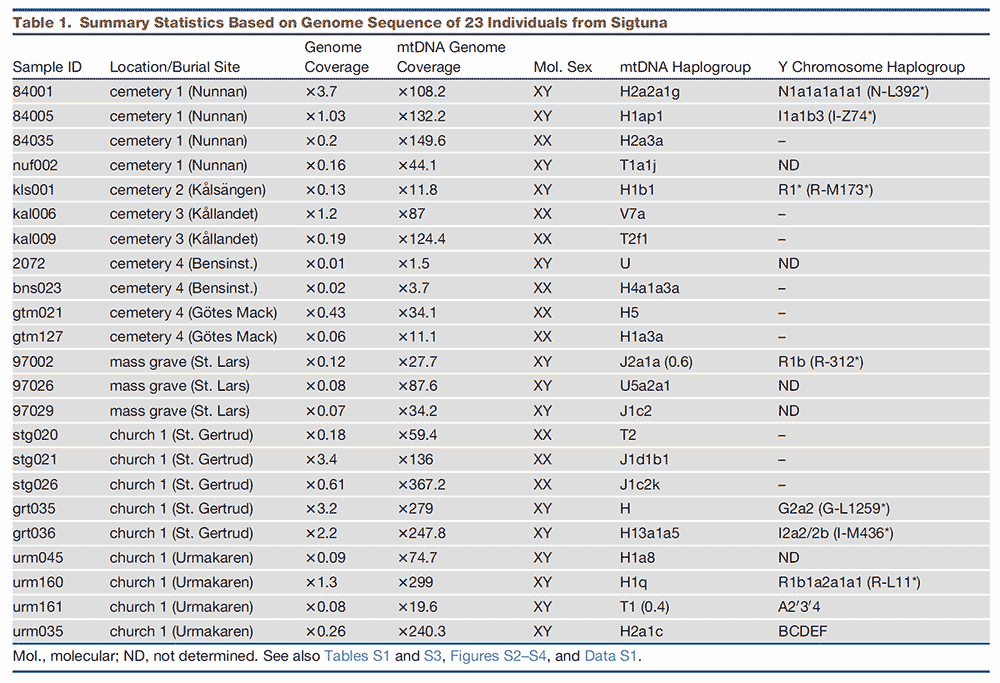 The mitochondrial genomes were sequenced at 1.5× to 367× coverage. Most of the individuals were assigned to haplogroups commonly found in current-day Europeans, such as H, J, and U [14, 26, 27]. All of these haplotypes are present in Scandinavia today.

The Y chromosome haplogroups were assigned in seven males. The Y haplogroups include I1a, I2a, N1a, G2a, and R1b. Two identified lineages (I2a and N1a) have not been found in modern-day Sweden or Norway [28, 29]. Haplogroups I and N are associated with eastern and central Europe, as well as Finno-Ugric groups [30]. Interestingly, I2a was previously identified in a middle Neolithic Swedish hunter-gatherer dating to ca. 3,000 years BCE [31].

In Sigtuna, the genetic diversity in the late Viking Age was greater than the genetic diversity in late Neolithic and Bronze Age cultures (Unetice and Yamnaya as examples) and modern East Asians; it was on par with Roman soldiers in England but lower than in modern-day European groups (GBR and FIN; Figure 2B). Within the town, the group excavated at church 1 has somewhat greater diversity than that at cemetery 1. Interestingly, the diversity at church 1 is nearly as high as that observed in Roman soldiers in England, which is remarkable, since the latter was considered to be an exceptionally heterogeneous group in contemporary Europe [39].

Different sex-related mobility patterns for Sigtuna inhabitants have been suggested based on material culture, especially ceramics. Building on design and clay analyses, some female potters in Sigtuna are thought to have grown up in Novgorod in Rus’ [40]. Moreover, historical sources mention female mobility in connection to marriage, especially among the elite from Rus’ and West Slavonic regions [41, 42]. Male mobility is also known from historical sources, often in connection to clergymen moving to the town [43].

Interestingly, we found a number of individuals from Sigtuna to be genetically similar to the modern-day human variation of eastern Europeans, and most harbor close genetic affinities to Lithuanians (Figure 2A). The strontium isotope ratios in 28 adult individuals with assigned biological sex and strontium values obtained from teeth (23 M1 and five M2) show that 70% of the females and 44% of the males from Sigtuna were non-locals (STAR Methods). The difference in migrant ratios between females and male mobility patterns was not statistically significant (Fisher’s exact test, p = 0.254 for 28 individuals and p = 0.376 for 16 individuals). Hence, no evidence of a sex-specific mobility pattern was found.

(…) As these social groups are not mirrored by our genetic or strontium data, this suggests that the inclusion in them was not based on kinship. Therefore, it appears as if socio-cultural factors, not biological bonds, governed where people were interred (i.e., the choice of cemetery).

Interesting from this paper is the higher genetic (especially Y-DNA) diversity found in more recent periods (see e.g. here) compared to Neolithic and Bronze Age cultures, which is probably the reason behind some obviously wrong interpretations, e.g. regarding links between Yamna and Corded Ware populations.

The sample 84001, a “first-generation short-distance migrant” of haplogroup N1c-L392 (N1a in the new nomenclature) brings yet more proof of how:

It is good practice to be registered and logged in to comment.
Please keep the discussion of this post on topic.
Civilized discussion. Academic tone.
For other topics, use the forums instead.
5 Comments
Oldest
Newest
Inline Feedbacks
View all comments