The Alemanni were a confederation of Germanic tribes that inhabited the eastern Upper Rhine basin and surrounding region (Fig. 1) (1). Roman ethnographers mentioned the Alemanni, but historical records from the 3rd to the 6th century CE contain no regular description of these tribes (2). The upheaval that occurred during the European Migration Period (Völkerwanderung) partly explains the interchangeability of nomenclature with the contemporaneous Suebi people of the same region and periods of geographic discontinuity in the historical record (3). This diverse nomenclature reflects centuries of interactions between Romans and other Germanic groups such as the Franks, Burgundians, Thuringians, Saxons, and Bavarians. With the defeat of the Alemanni by Clovis I of the Franks in 497 CE, Alamannia became a subsumed Duchy of the Merovingian Kingdom. This event solidified the naming of the inhabitants of this region as Alemanni (3). From the 5th to the 8th century CE, integration between the Franks and the Alemanni was reflected by changed burial practices, with households (familia) buried in richly furnished graves (Adelsgrablege) (4). The splendor of these Adelsgräber served to demonstrate the kinship structure, wealth, and status of the familia and also the power of the Franks (Personenverbandstaaten, a system of power based on personal relations rather than fixed territory). Because inclusion in familia during the Merovingian period was not necessarily based on inheritance or provenance, debate continues on the symbolism of these burial rites (5).

The 7th century CE Alemannic burial site at Niederstotzingen in southern Germany, used circa 580 to 630 CE, represents the best-preserved example of such an Alemannic Adelsgrablege. (…) 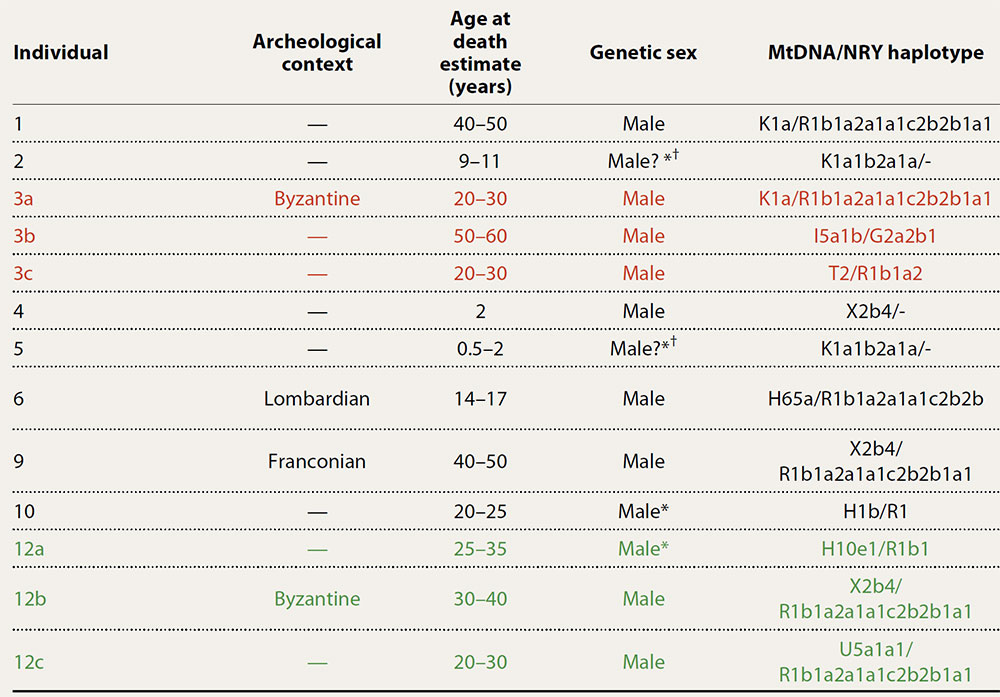 Strontium and oxygen isotope data from the enamel showed that most individuals are local rather than migrants (Table 1, table S2, and fig. S2), except for individuals 10 and 3B. (…)

Genomically, the individuals buried at Niederstotzingen can be split into two groups: Niederstotzingen North (1, 3A, 6, 9, 12B, and 12C), who have genomic signals that most resemble modern northern and eastern European populations, and Niederstotzingen South (3B and 3C), who most resemble modern-day Mediterraneans, albeit with recent common ancestry to other Europeans. Niederstotzingen North is composed of those buried with identifiable artifacts: Lombards (individual 6), Franks (individual 9), and Byzantines (individuals 3A and 12B), all of whom have strontium and oxygen isotope signals that support local provenance (fig. S2) (8). Just two individuals, 3B (Niederstotzingen South) and 10 (no sufficient autosomal data, with R1 Y-haplogroup), have nonlocal strontium isotope signals. The δ18O values suggest that individuals 10 and 3B may have originated from a higher-altitude region, possibly the Swiss-German Alpine foothills (8). Combined with the genome affinity of individual 3B to southern Europeans, these data provide direct evidence for incoming mobility at the site and for contact that went beyond exchange of grave goods (4). Familia had holdings across the Merovingian Kingdom and traveled long distances to maintain them; these holdings could have extended from northern Italy to the North Sea. Nobles displayed and accrued power by recruiting outside individuals into the household as part of their traveling retinue. Extravagant burial rites of these familia are symbolic evidence of the Frankish power systems based on people Personenverbandstaaten imposed from the 5th until the 8th century CE (4). The assignment of grave goods and the burial pattern do not follow any apparent pattern with respect to genetic origin or provenance, suggesting that relatedness and fellowship were held in equal regard at this burial.

Both kinship estimates show first-degree relatedness for pairs 1/3A, 1/6, 1/9, 3A/9, and 9/12B and second-degree relatedness for 1/12B, 3A/6, 3A/12B, and 6/9. Except for 12C, all of the Niederstotzingen North individuals are detectably and closely related. The Niederstotzingen South individuals are not detectably related to each other or any other members of the cohort. (…)

We demonstrated that five of the individuals (1, 3A, 6, 9, and 12B) were kin to at least second degree (Fig. 3 and tables S15 and S16); four of these were buried with distinguishable grave goods (discussed above and in fig. S1). These data show that at Niederstotzingen, at least in death, diverse cultural affiliations could be appropriated even within the same family across just two generations. This finding is somewhat similar to the burial of the Frankish King Childeric in the 5th century CE with a combination of Frankish and Byzantine grave goods that symbolized both his provenance and military service to the Romans (4). The burial of three unrelated individuals (3B, 3C, and 12C) in multiple graves beside the rest of the cohort would imply that this Alemannic group buried their dead based on a combination of familial ties and fellowship. One explanation could be that they were adopted as children from another region to be trained as warriors, which was a common practice at the time; these children were raised with equal regard in the familia (2, 4).

The 7th century CE burial in Niederstotzingen represents the best-preserved example of an Alemannic Adelsgrablege. The observation that burial of the remains was close to a Roman crossroads, orientated in a considered way, and associated with rich grave goods points to a noble gravesite of an Alemannic familia with external cultural influences. The high percentage of males in the burial site suggests that this site was intended for a ranked warrior group, meaning that the individuals are not representative of the population existing in 7th century CE Alemannia. The kinship estimates show that kinship structure was organized around the familia, which is defined by close association of related and unrelated individuals united for a common purpose. The apparent kinship structure is consistent with the hypothesized Personenverbandstaaten, which was a system by which Merovingian nobles enforced rule in the Duchies of Alemannia, Thuringia, Burgundy, and elsewhere. Beyond the origin of the grave goods, we show isotopic and genetic evidence for contact with communities external to the region and evidence for shared ancestry between northern and southern Europeans. This finding invites debate on the Alemannic power system that may have been highly influenced by mobility and personal relations.

Texts and images distributed under the terms of the Creative Commons Attribution-NonCommercial license.