Indo-European.eu » Culture » Anthropology » Recent Africa origin with hybridization, and back to Africa 70,000 years ago

The main unequivocal conclusion after three decades of phylogeographic mtDNA studies is the African origin of all extant modern humans. In addition, a southern coastal route has been argued for to explain the Eurasian colonization of these African pioneers. Based on the age of macrohaplogroup L3, from which all maternal Eurasian and the majority of African lineages originated, the out-of-Africa event has been dated around 60-70 kya. On the opposite side, we have proposed a northern route through Central Asia across the Levant for that expansion and, consistent with the fossil record, we have dated it around 125 kya. To help bridge differences between the molecular and fossil record ages, in this article we assess the possibility that mtDNA macrohaplogroup L3 matured in Eurasia and returned to Africa as basal L3 lineages around 70 kya.

The coalescence ages of all Eurasian (M,N) and African (L3 ) lineages, both around 71 kya, are not significantly different. The oldest M and N Eurasian clades are found in southeastern Asia instead near of Africa as expected by the southern route hypothesis. The split of the Y-chromosome composite DE haplogroup is very similar to the age of mtDNA L3. An Eurasian origin and back migration to Africa has been proposed for the African Y-chromosome haplogroup E. Inside Africa, frequency distributions of maternal L3 and paternal E lineages are positively correlated. This correlation is not fully explained by geographic or ethnic affinities. This correlation rather seems to be the result of a joint and global replacement of the old autochthonous male and female African lineages by the new Eurasian incomers.

These results are congruent with a model proposing an out-of-Africa migration into Asia, following a northern route, of early anatomically modern humans carrying pre-L3 mtDNA lineages around 125 kya, subsequent diversification of pre-L3 into the basal lineages of L3, a return to Africa of Eurasian fully modern humans around 70 kya carrying the basal L3 lineages and the subsequent diversification of Eurasian-remaining L3 lineages into the M and N lineages in the outside-of-Africa context, and a second Eurasian global expansion by 60 kya, most probably, out of southeast Asia. Climatic conditions and the presence of Neanderthals and other hominins might have played significant roles in these human movements. Moreover, recent studies based on ancient DNA and whole-genome sequencing are also compatible with this hypothesis. 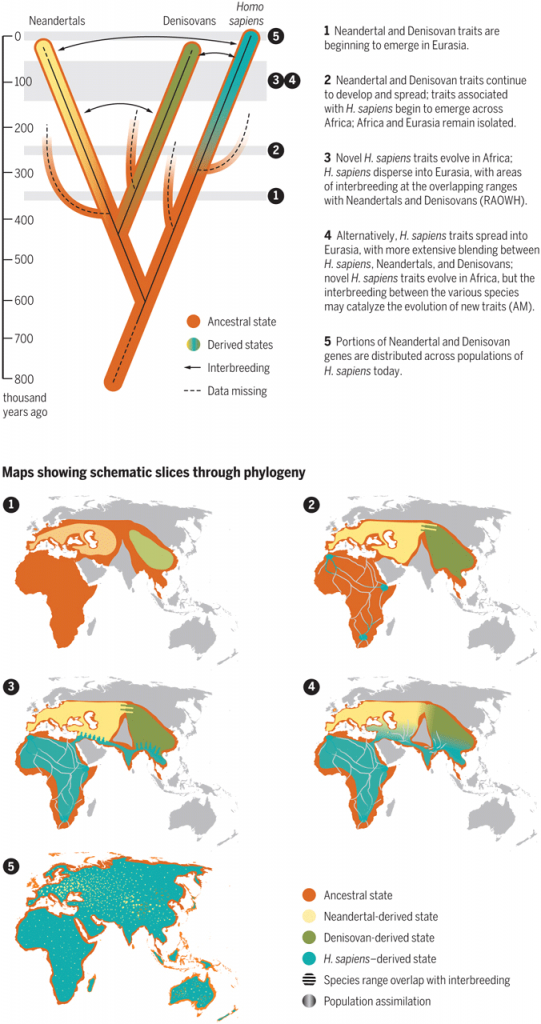