Interesting information from ISBA 8 sesions today, as seen on Twitter (see programme in PDF, and sessions from the 19th and the 20th september).

Genetic continuity in the western Eurasian Steppe broken not due to Scythian dominance, but rather at the transition to the Chernyakhov culture (Ostrogoths), by Järve et al.

The long-held archaeological view sees the Early Iron Age nomadic Scythians expanding west from their Altai region homeland across the Eurasian Steppe until they reached the Ponto-Caspian region north of the Black and Caspian Seas by around 2,900 BP1. However, the migration theory has not found support from ancient DNA evidence, and it is still unclear how much of the Scythian dominance in the Eurasian Steppe was due to movements of people and how much reflected cultural diffusion and elite dominance. We present new whole-genome results of 31 ancient Western and Eastern Scythians as well as samples pre- and postdating them that allow us to set the Scythians in a temporal context by comparing the Western Scythians to samples before and after within the Ponto-Caspian region. We detect no significant contribution of the Scythians to the Early Iron Age Ponto-Caspian gene pool, inferring instead a genetic continuity in the western Eurasian Steppe that persisted from at least 4,800–4,400 cal BP to 2,700–2,100 cal BP (based on our radiocarbon dated samples), i.e. from the Yamnaya through the Scythian period.

@steppebioarch changing the way we think about the Scythians and reminding us all about the importance of community both in the #ancient world and the present! #ISBA8 #archaeology #isotopes pic.twitter.com/sWWPttFprL

Detail of the slide with admixture of Scythian groups in Ukraine: 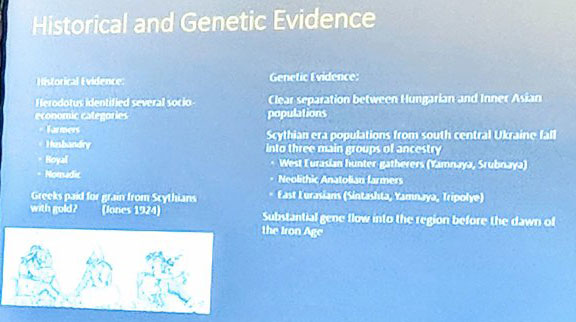 Interesting to read in combination with yesterday’s re-evaluation of Scythian mobility and settlement patterns in the west (showing adaptation to the different regional cultures), The Steppe was Sown – multi-isotopic research changes our understandings of Scythian diet and mobility, by Ventresca Miller et al.

Nomadic pastoralists conventionally known as the Scythians occupied the Pontic steppe during the Iron Age, c. 700-200 BC, a period of unprecedented pan-regional interaction. Popular science accounts of the Scythians promote narratives of roving bands of nomadic warriors traversing the steppe from the Altai Mountains to the Black Sea coastline. The quantity and scale of mobility in the region is usually emphasized based on the wide distribution of material culture and the characterization of Iron Age subsistence economies in the Pontic steppe and forest-steppe as mobile pastoralism. Yet, there remains a lack of systematic, direct analysis of the mobility of individuals and their animals. Here, we present a multi-isotopic analysis of humans from Iron Age Scythian sites in Ukraine. Mobility and dietary intake were documented through strontium, carbon and oxygen isotope analyses of tooth enamel. Our results provide direct evidence for mobility among populations in the steppe and forest-steppe zones, demonstrating a range of localized mobility strategies. However, we found that very few individuals came from outside of the broader vicinity of each site, often staying within a 90 km radius. Dietary intake varied at the intrasite level and was based in agro-pastoralism.

While terrestrial protein did form a portion of the diet for some individuals, there were also high levels of a 13C-enriched food source among many individuals, which has been interpreted as millet consumption. Individuals exhibiting 87Sr/86Sr ratios that fell outside the local range were more likely to have lower rates of millet consumption than those that fell within the local range. This suggests that individuals moving to the site later in life had different economic pursuits and consumed less millet. There is also strong evidence that children and infants moved at the pan-regional scale. Contrary to the popular narrative, the majority of Scythians engaged in localized mobility as part of agricultural lifeways while pan-regional movements included family groups.

Only small component of these pops highly mobile (in range of early childhood to adolescence), w/ interesting dietary composition correlates. Ongoing turn in Eurasian steppe archaeology towards seeing many of the iconically Scythian expressions of personal & warrior prestige…

North Africa, connecting sub-Saharan Africa and Eurasia, is important for understanding human history. However, the genetic history of modern humans in this region is largely unknown before the introduction of agriculture. After the Last Glacial Maximum modern humans, associated with the Iberomaurusian culture, inhabited a wide area spanning from Morocco to Libya. The Iberomaurusian is part of the early Later Stone Age and characterized by a distinct microlithic bladelet technology, complex hunter-gathering and tooth evulsion.

Here we present genomic data from seven individuals, directly dated to ~15,000-year-ago, from Grotte des Pigeons, Taforalt in Morocco. Uni-parental marker analyses show mitochondrial haplogroup U6a for six individuals and M1b for one individual, and Y-chromosome haplogroup E-M78 (E1b1b1a1) for males. We find a strong genetic affinity of the Taforalt individuals with ancient Near Easterners, best represented by ~12,000 year old Levantine Natufians, that made the transition from complex hunter-gathering to more sedentary food production. This suggests that genetic connections between Africa and the Near East predate the introduction of agriculture in North Africa by several millennia. Notably, we do not find evidence for gene flow from Paleolithic Europeans into the ~15,000 year old North Africans as previously suggested based on archaeological similarities. Finally, the Taforalt individuals derive one third of their ancestry from sub-Saharan Africans, best approximated by a mixture of genetic components preserved in present-day West Africans (Yoruba, Mende) and Africans from Tanzania (Hadza). In contrast, modern North Africans have a much smaller sub-Saharan African component with no apparent link to Hadza. Our results provide the earliest direct evidence for genetic interactions between modern humans across Africa and Eurasia.

A detail of the cultures involved in these population movements: 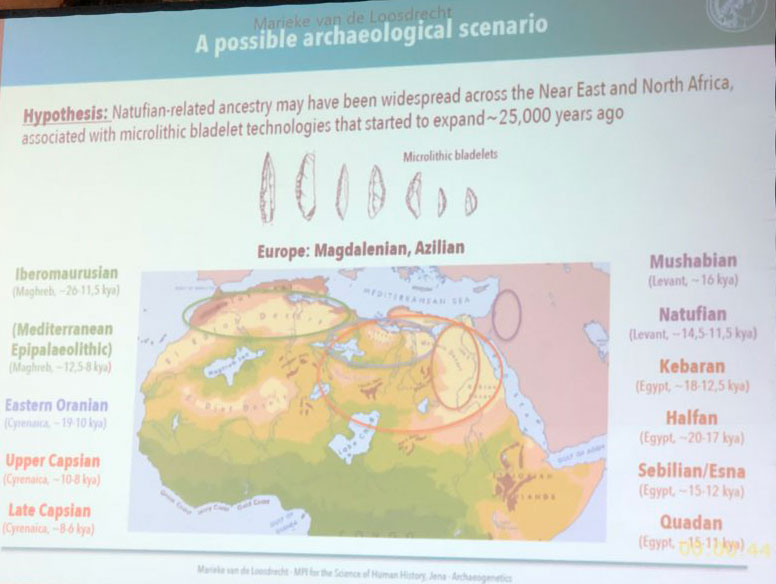 So, most likely, Natufian-related ancestry – as sub-Saharan ancestry – not related to the Afroasiatic expansion.

NOTE. This now probably outdated already by the new preprint on Dzudzuana samples, from the Caucasus.

Impact of colonization in north-eastern Siberia

Exploring the genomic impact of colonization in north-eastern Siberia by Seguin-Orlando et al.

Yakutia is the coldest region in the northern hemisphere, with winter record temperatures below minus 70°C. The ability of Yakut people to adapt both culturally and biologically to extremely cold temperatures has been key to their subsistence. They are believed to descend from an ancestral population, which left its original homeland in the Lake Baykal area following the Mongol expansion between the 13th and 15th centuries AD. They originally developed a semi-nomadic lifestyle, based on horse and cattle breeding, providing transportation, primary clothing material, meat, and milk. The early colonization by Russians in the first half of the 17th century AD, and their further expansion, have massively impacted indigenous populations. It led not only to massive epidemiological outbreaks, but also to an important dietary shift increasingly relying on carbohydrate-rich resources, and a profound lifestyle transition with the gradual conversion from Shamanism to Christianity and the establishment of new marriage customs. Leveraging an exceptional archaeological collection of more than a hundred of bodies excavated by MAFSO (Mission Archéologique Française en Sibérie Orientale) over the last 15 years and naturally kept frozen by the extreme cold temperatures of Yakutia, we have started to characterize the (epi)genome of indigenous individuals who lived from the 16th to the 20th century AD. Current data include the genome sequence of approximately 50 individuals that lived prior to and after Russian contact, at a coverage from 2 to 40 fold. Combined with data from archaeology and physical anthropology, as well as microbial DNA preserved in the specimens, our unique dataset is aimed at assessing the biological consequences of the social and biological changes undergone by the Yakut people following their neolithisation by Russian colons.

“Exploring the genomic impact of colonization in North-Eastern #Siberia” – Andaine Seguin-Orlando #ISBA8 #aDNA with shotgun data from 110 #Yakut individuals over 4 regions and multiple archaeological phases of #Yakutia including 71 >1x coverage and 2 sequenced to high depth. pic.twitter.com/BGpecQPcGE

Also interesting to read Balanovsky’s session, and a previous paper on the expansion of Yakuts.