Much has been made of the supposed conservatism of the Slavic ceramic repertoire. In reality, the fossilization of pottery forms and, occasionally, patterns of decoration, are typically indications of maintaining pottery-making and its appearance “as remembered.” As such, conservatism (leading to the treatment of pots as heirlooms, a material reminiscence of life prior to migration with its idealized comforts and security) reveals a traumatic experience of the migration, “a break with familiarity of rules, landscapes, and the comfort of everyday routines.” Many analogies for the ceramic material from sites of the Lazuri-Pişcolt group in northwestern Transylvania point to the valley of the Morava at the border between present-day Slovakia and the Czech Republic, as well as to the upper valley of the Vistula, in southern Poland. If one accepts the idea of the Lazuri-Pişcolt group coming into being through migration from the Lower Danube region in the form of a forced movement of population under Avar control (see Chapter 4), then the specific types of Stanciu’s taxonomy may be explained as a fossilization of pottery forms in reaction to the traumatic experience of the migration. Moreover, parallels with the valleys of the Morava and the Vistula may be treated as secondary migrations from northwestern Transylvania farther to the west and northwest. In that case, one would have to assume that those groups were also pressed into a socially marginal position, most probably by the Avars. Furthermore, if the hypothesis of a forced movement of population is confirmed, then that would explain the leapfrogging pattern of “colonization” on both sides of the Carpathian Mountains during the 7th century. 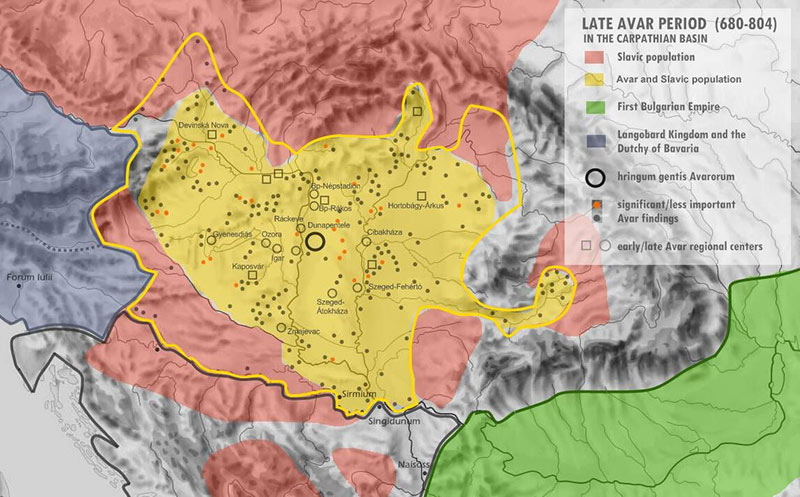 The heavy influence of Germanic on Slavic is almost exclusively lexical, which has been interpreted as an indication of unequal relations, with speakers of Slavic imitating the supposedly prestigious language patterns of speakers of Germanic. Similar sociopolitical conditions seem to have existed at the moment and in the place of Altaic–Slavic contact, as scholars assume a pidgin was created by (or for) speakers of Altaic languages to communicate with speakers of Slavic, who in turn strove to imitate the speech habits of their masters. A very different explanation is needed therefore for the spread of the koiné within the Carpathian Basin, and beyond. Slavic reached East Central Europe as a consequence of migration, most likely that of the Avars. Various groups of population from Eastern Europe, most likely from Right-Bank Ukraine, accompanied the Avar movement from the steppe lands north of the Black Sea into the Middle Danube region (see Chapter 4). Some of them may well have been speakers of (the) Slavic (koiné). The evidence of language contact strongly suggests that speakers of that language were in a position that was socially inferior to that of speakers of both Germanic and Altaic languages. The archaeological evidence, on the other hand, suggests that groups such as Lazuri-Pişcolt in northwestern Transylvania were intrusive, and possibly the result of forced movements of population from other areas controlled by the Avars.

By contrast, there may have been a short-distance migration from the northern parts of the Carpathian Basin to southwestern Slovakia and to Moravia. Whether or not the migrants were speakers of Slavic, the local population that the Avars found in place may have shifted to that koiné, which would have thus effectively become a lingua franca inside the Avar qaganate, as the Avar elites may have (occasionally) used Slavic in order to communicate with their subjects. Language shift may have also taken place in central Bohemia as well as in the lands of southeastern and eastern Germany, although forced movements of populations under Avar rule cannot be excluded. Such developments took place most likely after ad 600, and reached more peripheral areas only in the late 7th or early 8th century. Assuming that the population that established the supposedly Prague-culture settlements in the Upper Vistula and Upper San region spoke the Slavic koiné, the spread of that language throughout Poland was a slow process that began in the second half of the 7th century and continued long after ad 700. A parallel process may have brought speakers of the koiné across the Middle Dnieper river into Left-Bank Ukraine, as well as deep into the forest belt (the Polesie region) of northern Ukraine and southern Belarus. It is difficult, if not impossible, to tell whether it was language shift or migration (or both) that was responsible for the linguistic spread in all those regions and what the duration of the process may have been. This scenario is of course based on the idea of koiné, which is one of many possible explanations for the rise and spread of the language called (Common) Slavic. It is, in other words, little more than a hypothesis. However, when confronted with the archaeological data, that scenario seems more likely than others, at least to me. 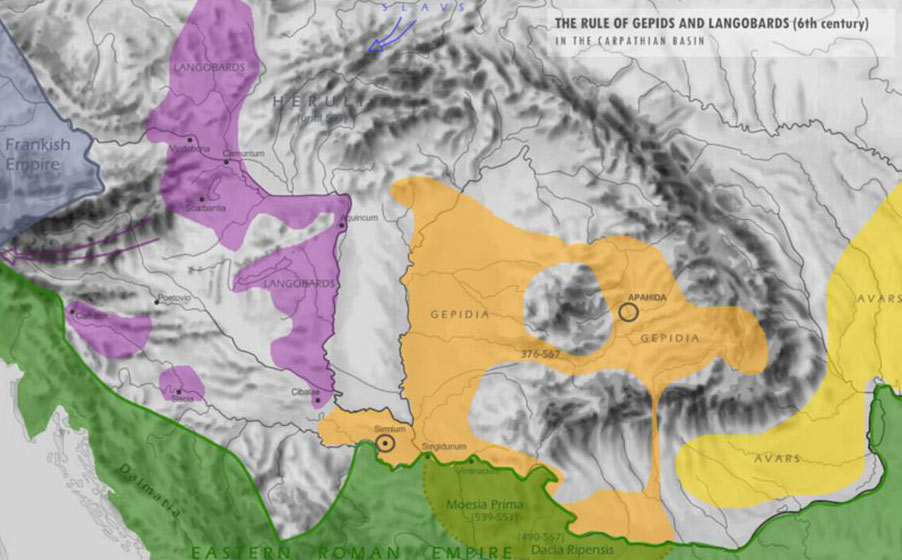 Slavic thus came into contact with other languages. Was then Slavic an ethnolect used to index Slavic identity? Judging by the linguistic evidence, the answer must be negative. Where a language in contact with other languages becomes a marker of ethnicity, the general expectation is that more grammatical than vocabulary borrowing will occur. However, the influence of Germanic and Altaic upon Slavic is predominantly lexical; by contrast, the influence of Romance (proto-Romanian; see Chapter 2) is phonological and morphological. The latter strongly suggests that Slavic was used as an ethnic marker in the Lower Danube region, along the northern border of the Roman Empire. By contrast, in the Carpathian Basin and beyond it, Slavic continued to operate as koiné and may well have become a lingua franca, in both cases without association with any particular ethnic group. However, the Wendish uprising under the leadership of Samo may have well created the need for sharp differentiation from the Avar enemy. If this was accompanied by linguistic divergence and the possible creation forever remain unknown. However, according to the Chronicle of Fredegar, the Wends, and not the Slavs, made Samo their king. What made the Wends different from the (rest of the) Slavs is the fact that the former served as befulci to the Avars. A group identity linked to a special role in the Avar army may have well been the basis for the ethnogenesis of the Wends. That much, at least, results from Fredegar’s account. There are few material correlates of that new ethnic identity and no archaeological traces of the special military role of the Wends.

According to Peter Stadler, the distribution within the Carpathian Basin of ceramic wares with prick-like combed punch decoration and potter’s marks shows a remarkably distinct cluster in the northwestern region (the northern part of Hungary, south of the river Danube, southwestern Slovakia, Moravia, and northeastern Austria). Since burial assemblages in that region which have produced such wares cannot be dated earlier than the Middle Avar period (ca. 630 to ca. 680), the distribution of those ceramic wares betrays (according to Stadler) the formation of a regional identity at a date which “remarkably coincides with the rise of Samo’s polity known from the Chronicle of Fredegar.” The wares in question continued to be produced and used well into the Late Avar period (ca. 680 to ca. 800), but nothing indicates that Samo’s Wendish polity survived that long. Nor is there any indication of local traditions for the wares with prick-like comb punches and potter’s marks on vessel bottoms. Nonetheless, those were not the only novel developments. Shortly before ca. 630, Moravia witnessed the relatively rapid spread of a number of archaeological traits most typical for the Lower Danube region and therefore associated with the “making of the Slavs.” Many more sites have been excavated in the Czech Republic than either in Slovakia or in Hungary that have produced evidence of clay pans and been dated ca. 600 or shortly after.(…) 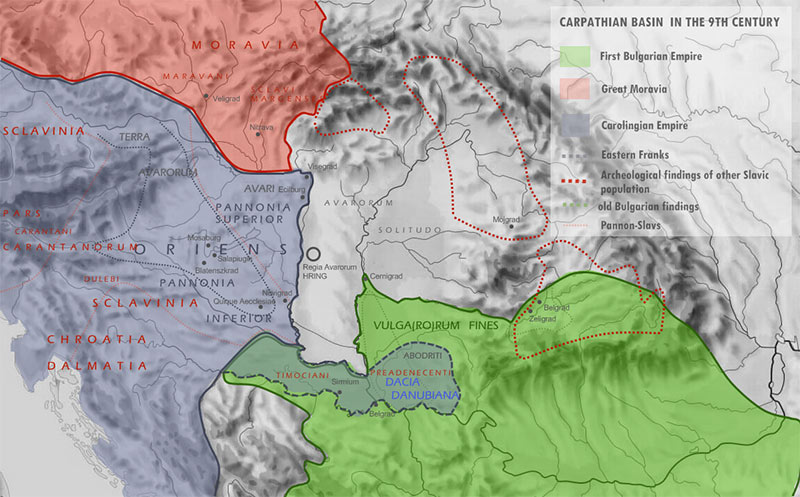 As in all his previous texts, it is refreshing to read Florin Curta’s bashing of countless naïve assumptions about Slavic ethnogenesis, particularly common in Soviet archaeology and linguistics of Eastern Europe – continued in post-Soviet times despite the generalized reaction against the previous socialist regimes. His deep knowledge and critical assessment of protohistory and early historical accounts, as well as archaeological details, is – as far as I know – unmatched by any other researcher interested in the origin of Slavs.

On the other hand, the author displays an obvious contempt for results and interpretations stemming from linguistics and population genomics, at the same time as he constantly resorts to both fields, referencing outdated papers and questionable theories to support his vision about the emergence of Common Slavic. This gives the impression of a cognitive dissonance difficult to understand; for example:

The truth is, dialectal classification, language contacts, and hydrotoponymy are essential to locate Proto-Slavs and Common Slavs in space and time. In fact, Slavs likely expanded with population movements, too: there is already evidence among Early Slavs of a certain prevalence of hg. I2a-L621 (sampled first among Hungarian Conqueror elites), E1b-V13 (found first among Scythians, and present among Germanic populations and late Avars), and R1a-M458 (found first among Iron Age Celts, and mainly associated with Vikings), apart from many different R1b-L23 subclades. This is true regardless of the likely genetic dissociation between Common Slavs and Proto-Slavs – much like medieval Celtic, Romance, Germanic, Turkic, or Indo-Aryan speakers didn’t accurately represent their linguistic predecessors.

Like many other knowledgeable historians, archaeologists, linguists, or geneticists, Florin Curta shows off his strengths in a book with an excellent overarching and multidisciplinary narrative of the making of the Slavs, but all his well-written chapters cannot make up for his lack of real interest in other disciplines. Especially because genetic and linguistic research lie at the core of his main, explicit aim: to investigate related or neighboring populations that spoke languages without a written record…

In the long term, it seems likely that Curta’s writings will show a surprising amount of fulfilled predictions, at least relative to the many other simplistic theories still popular among Eastern European researchers. However, it will probably also become evident that he missed out a great opportunity to more accurately predict population and language movements by not expanding his interests beyond archaeology and protohistory.

Featured images from the Carpathian Basin are apparently Public Domain images by user Fz22 from Wikipedia.