We report genome-wide ancient DNA from 49 individuals forming four parallel time transects in Belize, Brazil, the Central Andes, and the Southern Cone, each dating to at least ∼9,000 years ago. The common ancestral population radiated rapidly from just one of the two early branches that contributed to Native Americans today. We document two previously unappreciated streams of gene flow between North and South America. One affected the Central Andes by ∼4,200 years ago, while the other explains an affinity between the oldest North American genome associated with the Clovis culture and the oldest Central and South Americans from Chile, Brazil, and Belize. However, this was not the primary source for later South Americans, as the other ancient individuals derive from lineages without specific affinity to the Clovis-associated genome, suggesting a population replacement that began at least 9,000 years ago and was followed by substantial population continuity in multiple regions.

The D4h3a mtDNA haplogroup has been hypothesized to be a marker for an early expansion into the Americas along the Pacific coast (Perego et al., 2009). However, its presence in two Lapa do Santo individuals and Anzick-1 (Rasmussen et al., 2014) makes this hypothesis unlikely.

The patterns we observe on the Y chromosome also force us to revise our understanding of the origins of present-day variation. Our ancient DNA analysis shows that the Q1a2a1b-CTS1780 haplogroup, which is currently rare, was present in a third of the ancient South Americas. In addition, our observation of the currently extremely rare C2b haplogroup at Lapa do Santo disproves the suggestion that it was introduced after 6,000 BP (Roewer et al., 2013).

(…) Our discovery that the Clovis-associated Anzick-1 genome at ∼12,800 BP shares distinctive ancestry with the oldest Chilean, Brazilian, and Belizean individuals supports the hypothesis that an expansion of people who spread the Clovis culture in North America also affected Central and South America, as expected if the spread of the Fishtail Complex in Central and South America and the Clovis Complex in North America were part of the same phenomenon (direct confirmation would require ancient DNA from a Fishtail-context) (Pearson, 2017). However, the fact that the great majority of ancestry of later South Americans lacks specific affinity to Anzick-1 rules out the hypothesis of a homogeneous founding population. Thus, if Clovis-related expansions were responsible for the peopling of South America, it must have been a complex scenario involving arrival in the Americas of sub-structured lineages with and without specific Anzick-1 affinity, with the one with Anzick-1 affinity making a minimal long-term contribution. While we cannot at present determine when the non-Anzick-1 associated lineages first arrived in South America, we can place an upper bound on the date of the spread to South America of all the lineages represented in our sampled ancient genomes as all are ANC-A and thus must have diversified after the ANC-A/ANC-B split estimated to have occurred ∼17,500–14,600 BP (Moreno-Mayar et al., 2018a). 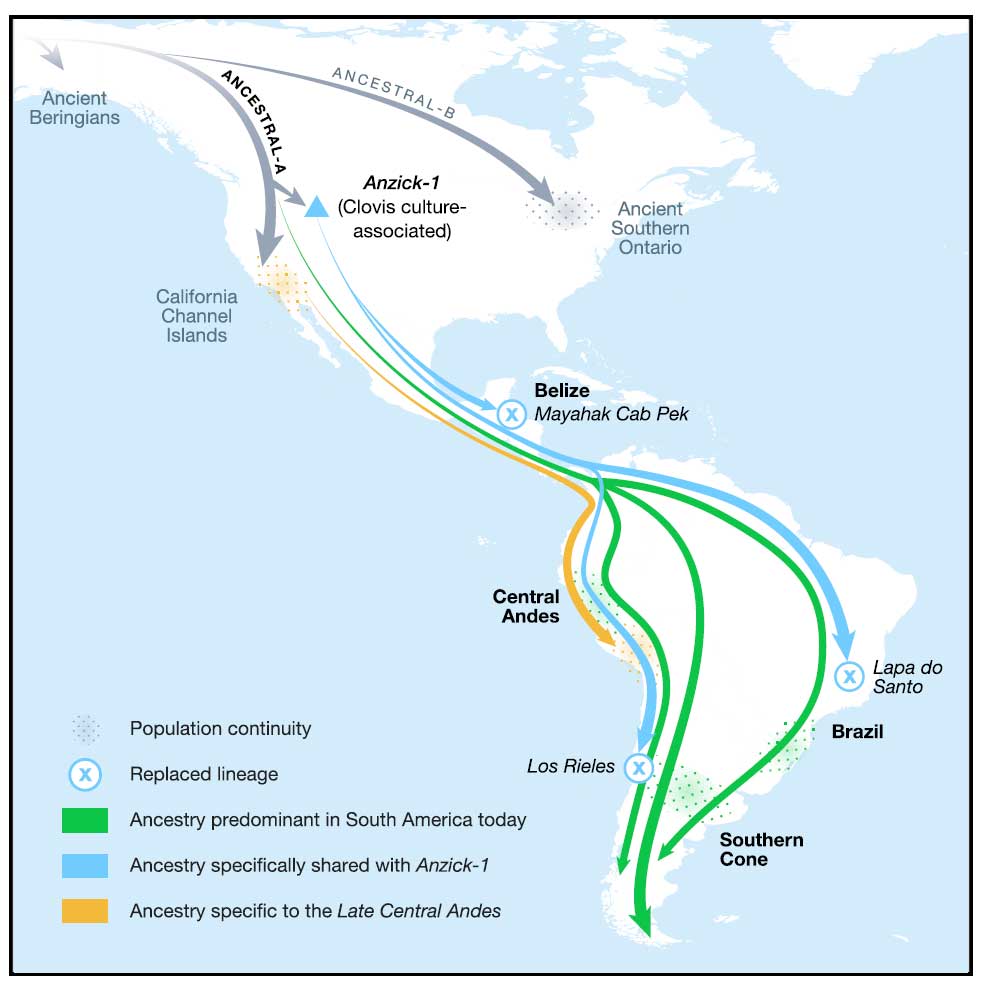 Studies of the peopling of the Americas have focused on the timing and number of initial migrations. Less attention has been paid to the subsequent spread of people within the Americas. We sequenced 15 ancient human genomes spanning Alaska to Patagonia; six are ≥10,000 years old (up to ~18× coverage). All are most closely related to Native Americans, including an Ancient Beringian individual, and two morphologically distinct “Paleoamericans.” We find evidence of rapid dispersal and early diversification, including previously unknown groups, as people moved south. This resulted in multiple independent, geographically uneven migrations, including one that provides clues of a Late Pleistocene Australasian genetic signal, and a later Mesoamerican-related expansion. These led to complex and dynamic population histories from North to South America.

The Australasian signal is not present in USR1 or Spirit Cave, but only appears in Lagoa Santa. None of these individuals has UPopA/Mesoamerican-related admixture, which ap-parently dampened the Australasian signature in South American groups, such as the Karitiana. These findings suggest the Australasian signal, possibly present in a structured ancestral NA population, was absent in NA prior to the Spirit Cave/Lagoa Santa split. Groups carrying this signal were either already present in South America when the ancestors of Lagoa Santa reached the region, or Australasian-related groups arrived later but before 10.4 ka (the Lagoa Santa 14C age). That this signal has not been previously documented in North America implies that an earlier group possessing it had disappeared, or a later-arriving group passed through North America without leaving any genetic trace. If such a signal is ultimately detected in North America it could help determine when groups bear-ing Australasian ancestry arrived, relative to the divergence of SNA groups.

Although we detect the Australasian signal in one of the Lagoa Santa individuals identified as a “Paleoamerican,” it is absent in other “Paleoamericans” (2, 10), including Spirit Cave with its strong genetic affinities to Lagoa Santa. This indicates the “Paleoamerican” cranial form is not associated with the Australasian genetic signal, as previously suggested (6), or any other specific NA clade (2). The cause of this cranial form, if it is representative of broader population pat-terns, evidently did not result from separate ancestry, but likely multiple factors, including isolation and drift and non-stochastic mechanisms.

The peopling of the Andean highlands above 2500 m in elevation was a complex process that included cultural, biological, and genetic adaptations. Here, we present a time series of ancient whole genomes from the Andes of Peru, dating back to 7000 calendar years before the present (BP), and compare them to 42 new genome-wide genetic variation datasets from both highland and lowland populations. We infer three significant features: a split between low- and high-elevation populations that occurred between 9200 and 8200 BP; a population collapse after European contact that is significantly more severe in South American lowlanders than in highland populations; and evidence for positive selection at genetic loci related to starch digestion and plausibly pathogen resistance after European contact. We do not find selective sweep signals related to known components of the human hypoxia response, which may suggest more complex modes of genetic adaptation to high altitude.