As you can see from my interest in the recently published Olalde et al. (2019) Iberia paper, once you accept that East Bell Beakers expanded North-West Indo-European, the most important question becomes how did its known dialects spread to their known historic areas.

We already had a good idea about the expansion of Celts, based on proto-historical accounts, fragmentary languages, and linguistic guesstimates, but the connection of Celtic with either Urnfield or slightly later Hallstatt/La Tène was always blurred, due to the lack of precise data on population movements.

A manuscript co-authored by Angel Carracedo, from the University of Santiago de Compostela, and (always according to him) pre-accepted in Nature, will offer more insight into the population substructure of Spain, based on autosomal DNA.

Carracedo’s lecture about DNA (in Galician), including his summary of the paper (from december 2017):

Some of the points made in the video:

… Read the rest “Population substructure in Iberia, highest in the north-west territory (to appear in Nature)”

A new preprint paper at BioRxiv, The maternal genetic make-up of the Iberian Peninsula between the Neolithic and the Early Bronze Age, by Szécsényi-Nagy et al. (2017).

Agriculture first reached the Iberian Peninsula around 5700 BCE. However, little is known about the genetic structure and changes of prehistoric populations in different geographic areas of Iberia. In our study, we focused on the maternal genetic makeup of the Neolithic (~ 5500-3000 BCE), Chalcolithic (~ 3000-2200 BCE) and Early Bronze Age (~ 2200-1500 BCE). We report ancient mitochondrial DNA results of 213 individuals (151 HVS-I sequences) from the northeast, central,

… Read the rest “Iberian Peninsula: Discontinuity in mtDNA between hunter-gatherers and farmers, not so much during the Chalcolithic and EBA” 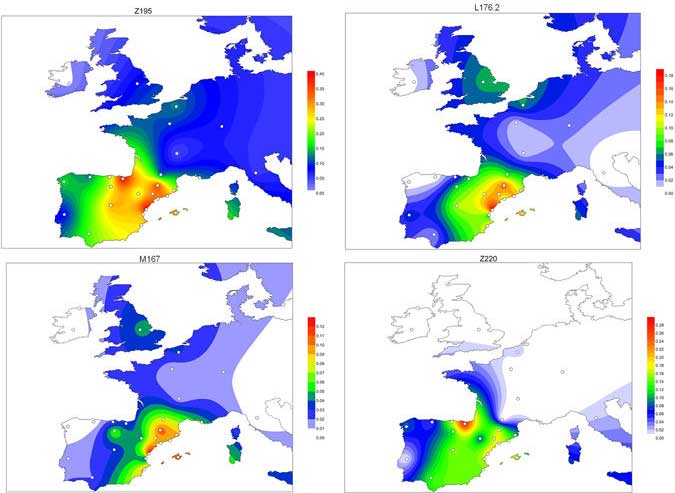