Open access Emergence and Spread of Basal Lineages of Yersinia pestis during the Neolithic Decline, by Rascovan et al. Cell (2018)

Between 5,000 and 6,000 years ago, many Neolithic societies declined throughout western Eurasia due to a combination of factors that are still largely debated. Here, we report the discovery and genome reconstruction of Yersinia pestis, the etiological agent of plague, in Neolithic farmers in Sweden, pre-dating and basal to all modern and ancient known strains of this pathogen. We investigated the history of this strain by combining phylogenetic and molecular clock analyses of the bacterial genome, detailed archaeological information, and genomic analyses from infected individuals and hundreds of ancient human samples across Eurasia. These analyses revealed that multiple and independent lineages of Y. pestis branched and expanded across Eurasia during the Neolithic decline, spreading most likely through early trade networks rather than massive human migrations. Our results are consistent with the existence of a prehistoric plague pandemic that likely contributed to the decay of Neolithic populations in Europe.

At least it still seems that the plague and its demographic consequences were a good reason for the expansion of Indo-Europeans and Uralians into Europe, as we thought…

Featured image, from the paper: “The predicted model of early dispersion of Y. pestis during Neolithic and Bronze Age was built by integrating phylogenetic information of Y. pestis strains from this period (Figure 1E), their divergence times (Figure 3), the geographic locations, carbon dating and genotypes of the individuals, and the archaeological record. The model suggests that early Y. pestis strains likely emerged and spread from mega-settlements in Eastern Europe (built by the Trypillia Culture) into Europe and the Eurasian steppe, most likely through human interaction networks. This was facilitated by wheeled and animal-powered transports, which are schematized in the map with red lines with arrows pointing in both senses. Our model builds upon a previous model (Andrades Valtuena et al., 2017) that proposed the spread of plague to be associated with large-scale human migrations (blue line).”

Native Americans from the Amazon, Andes, and coastal geographic regions of South America have a rich cultural heritage but are genetically understudied, therefore leading to gaps in our knowledge of their genomic architecture and demographic history. In this study, we sequence 150 genomes to high coverage combined with an additional 130 genotype array samples from Native American and mestizo populations in Peru. The majority of our samples possess greater than 90% Native American ancestry, which makes this the most extensive Native American sequencing project to date. Demographic modeling reveals that the peopling of Peru began ∼12,000 y ago, consistent with the hypothesis of the rapid peopling of the Americas and Peruvian archeological data. We find that the Native American populations possess distinct ancestral divisions, whereas the mestizo groups were admixtures of multiple Native American communities that occurred before and during the Inca Empire and Spanish rule. In addition, the mestizo communities also show Spanish introgression largely following Peruvian Independence, nearly 300 y after Spain conquered Peru. Further, we estimate migration events between Peruvian populations from all three geographic regions with the majority of between-region migration moving from the high Andes to the low-altitude Amazon and coast. As such, we present a detailed model of the evolutionary dynamics which impacted the genomes of modern-day Peruvians and a Native American ancestry dataset that will serve as a beneficial resource to addressing the underrepresentation of Native American ancestry in sequencing studies.

The high frequency of Native American mitochondrial haplotypes suggests that European males were the primary source of European admixture with Native Americans, as previously found (23, 24, 41, 42). The only Peruvian populations that have a proportion of the Central American component are in the Amazon (Fig. 2A). This is supported by Homburger et al. (4), who also found Central American admixture in other Amazonian populations and could represent ancient shared ancestry or a recent migration between Central America and the Amazon.

A similar policy of large-scale consolidation of multiple Native American populations was continued during Spanish rule through their program of reducciones, or reductions (31, 32), which is consistent with the hypothesis that the Inca and Spanish had a profound impact on Peruvian demography (25). The result of these movements of people created early New World cosmopolitan communities with genetic diversity from the Andes, Amazon, and coast regions as is evidenced by mestizo populations’ ancestry proportions (Fig. 3A). Following Peruvian independence, these cosmopolitan populations were those same ones that predominantly admixed with the Spanish (Fig. 3B). Therefore, this supports our model that the Inca Empire and Spanish colonial rule created these diverse populations as a result of admixture between multiple Native American ancestries, which would then go on to become the modern mestizo populations by admixing with the Spanish after Peruvian independence.

Further, it is interesting that this admixture began before the urbanization of Peru (26) because others suspected the urbanization process would greatly impact the ancestry patterns in these urban centers (25). (…)

Understanding how deleterious genetic variation is distributed across human populations is of key importance in evolutionary biology and medical genetics. However, the impact of population size changes and gene flow on the corresponding mutational load remains a controversial topic. Here, we report high-coverage exomes from 300 rainforest hunter-gatherers and farmers of central Africa, whose distinct subsistence strategies are expected to have impacted their demographic pasts. Detailed demographic inference indicates that hunter-gatherers and farmers recently experienced population collapses and expansions, respectively, accompanied by increased gene flow. We show that the distribution of deleterious alleles across these populations is compatible with a similar efficacy of selection to remove deleterious variants with additive effects, and predict with simulations that their present-day additive mutation load is almost identical. For recessive mutations, although an increased load is predicted for hunter-gatherers, this increase has probably been partially counteracted by strong gene flow from expanding farmers. Collectively, our predicted and empirical observations suggest that the impact of the recent population decline of African hunter-gatherers on their mutation load has been modest and more restrained than would be expected under a fully recessive model of dominance. 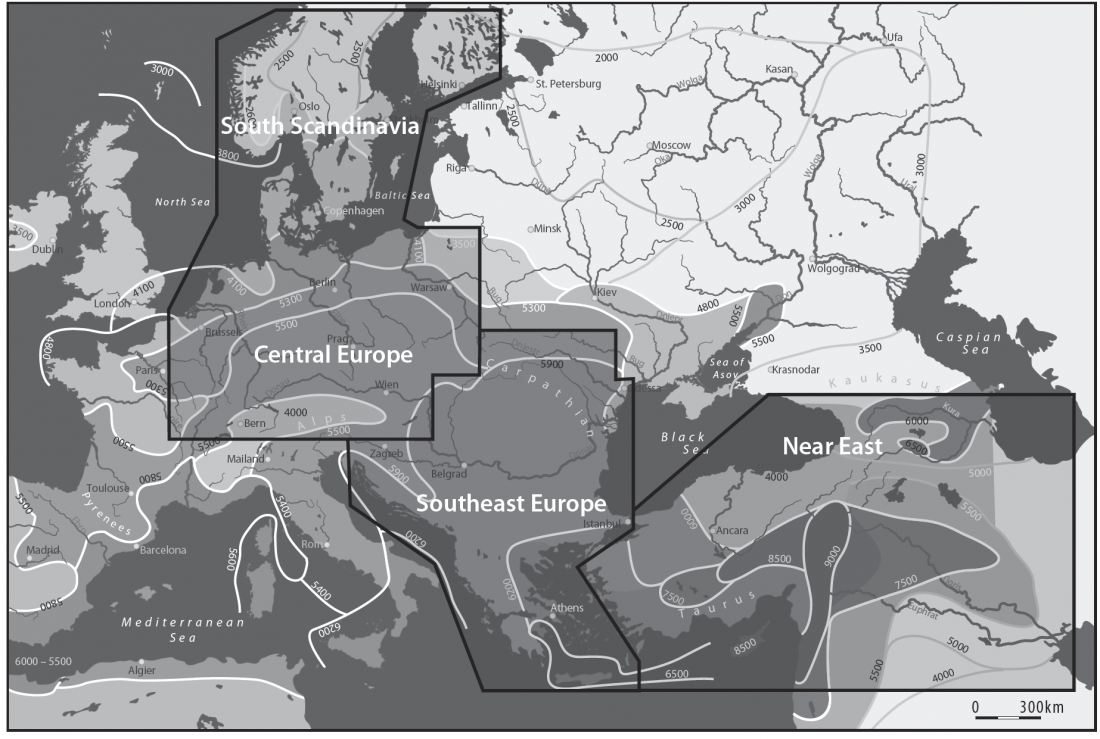 I mentioned in the Indo-European demic diffusion model the need to assess absolute and relative population growth – as well as other demographic changes – to interpret genomic data from the different European regions studied.

One article I referred to was Demographic traces of technological innovation, social change and mobility: from 1 to 8 million Europeans (6000–2000 BCE), by Johannes Müller.

In our population estimations for Central Europe and Scandinavia, population increases are associated with the periods from 5500–5000 BCE (LBK) and 3500–3000 BCE (middle and late Funnelbeaker Culture), but not for the period from 2500–2000 BCE (Bell Beaker). Consequently, this would possibly indicate forms of immigration for the first two periods and a form of interregional networking (e.g. through marriage) for the latter. But as also for the first cases on the supra-regional level (which our enquiries investigated), no other area with a significant population decrease could be observed, therefore “proof” for larger population displacement is not given. For such inquiries, studies on a more regional level are probably necessary. Nevertheless, for the Bell Beaker period I would like to exclude the possibility of large population influxes at least to Central Europe and South Scandinavia as the population values show no indication of such an event (cf. Fig. 10). In consequence, supra-regional networks or population-exchanges between smaller regions might be responsible for the isotope values.

One could interpret from the graphics, including known anthropological and genomic data, that:

Also important to interpret genomic data are the actual economic and social differences in the different periods and cultures – usually growing after the introduction of farming. A good example is the scarce data from Khvalynsk, where the sample of haplogroup R1b (most likely of subclade M269) shows – apart from a closer position in PCA to Yamna – a a high-status burial, similar to high-status individuals buried under kurgans in later Yamna graves. This man was therefore probably a founder of an elite group of patrilineally-related families, which dominated in the following Yamna culture, which explains the clear expansion of this haplogroup’s subclades from this region.

Other interesting papers on European demographics by Johannes Müller include:

Check out also works by Marko Porčić (such as Radiocarbon test for demographic events in written and oral history) or Stephen Shennan.