I have been updating the Ancient DNA Dataset with date estimates published in the recent preprint by Sedig, Olalde, Patterson & Reich bioRxiv (2020), and it had a reference to some interesting new samples from Khvalynsk, showing tight family connections.

Information below is taken from the preprint and from the latest version of the Reich Lab’s Allen Ancient DNA Resource (AADR). Information about the three published Khvalynsk samples is taken from Mathieson et al. Nature (2015) supplementary materials, and each ID features a different font color in the text below for clarity’s sake.

I0434, … Read the rest “Proto-Indo-Europeans: A family business”

Over the past week or so, since the publication of new Corded Ware samples in Narasimhan, Patterson et al. (2019) and after finding out that the R1a-M417 star-like phylogeny may have started ca. 3000 BC, I have been ruminating the relevance of contradictory data about the Ukraine_Eneolithic_o sample from Alexandria, its potential wrong radiocarbon date, and its implications for the Indo-European question.

How many other similar ‘controversial’ samples are there which we haven’t even considered? And what mechanisms are in place to control that the case of Hajji_Firuz_CA I2327 is not repeated?

Looking at the PCA of Wang et al. (2018), I realized that Sredni Stog / Corded Ware peoples seem to lie somewhere between:

This multiethnic interaction of the western steppe fits therefore the complex archaeological description of events in the North Pontic, Lower Danube, and Dnieper-Dniester regions. Here are some interesting samples related to those long-lasting contacts:

Once the haplogroups of the announced West Yamna and Yamna settlers in Hungary and Khvalynsk from Ekaterinovka appear, it is to be expected that there won’t be much discussion on the Y-DNA bottlenecks that affected Khvalynsk – Yamna migrations.

So let’s cut to the chase and see where Corded Ware peoples (mainly of R1a-Z645 subclades) got their so-called “steppe admixture” different from that of Yamna. Because, as you might have realized by now, Sredni Stog – and consequently Corded Ware – remains nowadays an undefined (archaeological) mess.

Rassamakin explains it quite well, in the chapter Eneolithic of the Black … Read the rest “Sredni Stog, Proto-Corded Ware, and their “steppe admixture”” 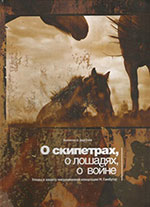 About two months ago I stumbled upon a gem in archaeological studies related to Proto-Indo-Europeans, the book О скипетрах, о лошадях, о войне: этюды в защиту миграционной концепции М.Гимбутас (On sceptres, on horses, on war: Studies in defence of M. Gimbutas’ migration concepts), 2007, by V. A. Dergachev, from the Institute of Cultural Heritage of the Moldavian Republic.

Dergachev’s work dedicates 488 pages to a very specific Final Neolithic-Eneolithic period in the Pontic-Caspian steppe, and the most relevant parts of the book concern the nature and expansion of horses and horse domestication, horse-head scepters, and other horse-related symbology… Read the rest “About Scepters, Horses, and War: on Khvalynsk migrants in the Caucasus and the Danube”

A commenter in a previous post left a reference to an oral communication by Aleksander Khokhlov – shared in a Russian forum on genetics – , from the XIV Conference on Samaran Archaeology, 27-28th January 2018 (still publicized in the Samaran Archaeological Society).

NOTE. You may know Khokhlov as a palaeoanthropologist, part of the Samara Valley project, like David W. Anthony. See the project referenced here, or their recently published book.

Here is my translation of the reported summary (emphasis mine):

Khokhlov, A.A. Preliminary results of anthropological and genetic studies of materials of the Volga-Ural