Indo-European.eu » Culture » Anthropology » David Reich on the influence of ancient DNA on Archaeology and Linguistics 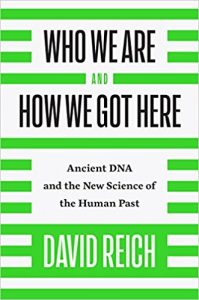 An interesting interview has appeared on The Atlantic, Ancient DNA Is Rewriting Human (and Neanderthal) History, on the occasion of the publication of David Reich’s book Who We Are and How We Got Here: Ancient DNA and the New Science of the Human Past.

Some interesting excerpts (I have emphasized some of Reich’s words):

On the efficiency of the Reich Lab

Zhang: How much does it cost to process an ancient DNA sample right now?

Reich: In our hands, a successful sample costs less than $200. That’s only two or three times more than processing them on a present-day person. And maybe about one-third to one half of the samples we screen are successful at this point.

This is probably the most controversial assessment for the Twitterverse, since it puts the Reich Lab at the top of the publishing chain, but I don’t find this fact controversial; at all.

I don't understand why making something "industrial" in this context is something to brag about really. It upsets me. Without ethical, social, and historical considerations "industrial aDNA research" can be disenfranchising and irrespecutful for some countries/communities. https://t.co/DOIVYJHb3I

Anyone interested in doing genetic studies has free datasets, papers, and bioinformatic tools at hand – thanks to his lab, mostly – to develop new methods and publish papers. Such secondary works won’t probably be published in journals with the highest impact factor, but what can you do, welcome to the scientific world…

Also, by the looks of it, every single researcher involved in recovering an archaeological sample is included as co-author of the papers, so there is a clear benefit for ‘local’ researchers collaborating with the Lab. Therefore, these researchers and their institutions are responsible for whatever unfair situation might be created by their exchange.

On Archaeology’s reaction to Kossinna and Nazi ideas:

(…)
Zhang: You actually had German collaborators drop out of a study because of these exact concerns, right? One of them wrote, “We must(!) avoid … being compared with the so-called ‘siedlungsarchäologie Method’ from Gustaf Kossinna!”

Reich: Yeah, that’s right. I think one of the things the ancient DNA is showing is actually the Corded Ware culture does correspond coherently to a group of people. I think that was a very sensitive issue to some of our coauthors, and one of the coauthors resigned because he felt we were returning to that idea of migration in archaeology that pots are the same as people. There have been a fair number of other coauthors from different parts of continental Europe who shared this anxiety.

We responded to this by adding a lot of content to our papers to discuss these issues and contextualize them. Our results are actually almost diametrically opposite from what Kossina thought because these Corded Ware people come from the East, a place that Kossina would have despised as a source for them. But nevertheless it is true that there’s big population movements, and so I think what the DNA is doing is it’s forcing the hand of this discussion in archaeology, showing that in fact, major movements of people do occur. They are sometimes sharp and dramatic, and they involve large-scale population replacements over a relatively short period of time. We now can see that for the first time.

What the genetics is finding is often outside the range of what the archaeologists are discussing these days.

This is mostly true: Genomics offers a whole new dimension to assess exchanges among groups, and help thus select anthropological models of cultural diffusion. They offer another way of interpreting prehistoric cultural evolution and change, including the investigation of potential languages of these cultures, ways of change and replacement, etc.

Also, he acknowledges that there is a lot of content added to the papers in search for context – and thus avoid simplistic assumptions and conclusions – , so this is a reasonable way to look at the (often erroneous) cultural and linguistic context which accompany most genetic papers, and even the new methods being developed to assess samples.

On the other hand, the fact that many in Archaeology didn’t want to discuss migrations does not mean that it was not discussed at all, as he seems to suggest.

On how Genomics fits with traditional disciplines

Zhang: I think at one point in your book you actually describe ancient DNA researchers as the “barbarians” at the gates of the study of history.

Zhang: Does it feel that way? Have you gotten into arguments with archaeologists over your findings?

Reich: I think archaeologists and linguists find it frustrating that we’re not trained in the language of archaeology and all these sensitivities like about Kossinna. Yet we have this really powerful tool which is this way of looking at things nobody has been able to look at before.

The point I was trying to make there was that even if we’re not always able to articulate the context of our findings very well, this is very new information, and a serious scholar really needs to take this on board. It’s dangerous. Barbarians may not talk in an educated and learned way but they have access to weapons and ways of looking at things that other people haven’t looked to. And time and again we’ve learned in the past that ignoring barbarians is a dangerous thing to do.

I think this is also mostly true: many academics find it frustrating to read these papers, most of which lack a minimal understanding of the topics being discussed.

I also agree with him in that the study of ancient DNA is a very powerful tool. Everyone involved in Anthropology and Archaeology should be trained these days in Genomics – or, at least, they should have the opportunity to do so.

On the dangers of Genomics

Reich: (…) I know there are extremists who are interested in genealogy and genetics. But I think those are very marginal people, and there’s, of course, a concern they may impinge on the mainstream.

But if you actually take any serious look at this data, it just confounds every stereotype. It’s revealing that the differences among populations we see today are actually only a few thousand years old at most and that everybody is mixed. I think that if you pay any attention to this world, and have any degree of seriousness, then you can’t come out feeling affirmed in the racist view of the world. You have to be more open to immigration. You have to be more open to the mixing of different peoples. That’s your own history.

I guess David Reich does not frequent forums on human genetics linked to ethnolinguistic identification, or he would not think of ‘extremists’ as marginal people. Or else we have a different view of what defines an ‘extremist’…

I did not have the best of opinions about David Reich – or any other geneticist involved in publishing anthropological theories, for that matter. I have always had great respect for their scientific work, though.

If anything, this article shows that he knows his own (and his fellow geneticists’) limitations, and the dangers and limitations of Genomics as a whole, so I have more respect for him – and anyone involved with his Lab’s work – after reading this piece.

I would sum up his interview with his humbling sentence:

We should think we really don’t know what we’re talking about.

NOTE. Also on the occasion of the publication of his book, Nature has published the piece Sex, power and ancient DNA – Turi King hails David Reich’s thrilling account of mapping humans through time and place.

After buying Lalueza-Fox’s recent book ‘La forja genètica d’Europa’, I don’t really feel like buying another book on Genomics and migrations from a geneticist. If you have read Reich’s book, please share your impressions.

EDIT (19 MAR 2018): Razib Khan has written a ‘preview of a review‘ that he intends to publish on the National Review, and it seems the book might be worth it, after all.