Indo-European.eu » Culture » History » Why we shouldn’t care about the fixation of Neo-Nazis with the Middle Ages

People are obsessed with what racists, white supremacists, Neo-Nazis, etc. use to cover their ignorance, to hide their lack of political or social arguments, and to boost their pathologically low self-confidence. Now it seems to be the Middle Ages.

Some time ago I already read about this new trend, but I didn’t care. For me, as a supporter of a revival of Indo-European as a modern language, it was a relief that their fixation was somewhere different than Indo-Europeans.

If you do that search, you might read a lot of right populist crap using Indo-European matters to support their ideas. You might even begin to associate one with the other, because it seems as if research on Indo-European questions somehow boosted those extremist ideals, right? If you think that, you are obviously part of the problem.

And all of this has come at a cost for anyone involved or interested in any of those themes. It is only natural that Nazis evolve; just like shit decays, they move on. However,their interest about medieval times is not new (as is clear from the featured image of this post, and other propaganda from the time); it is just stronger now.

Now I see some medieval scholars complaining, in Twitter and in the news, calling for all to do something to protect the field of Medieval Studies.

Don't let art or scholarship be a blank space on which racists can project. On #TaylorSwift and Medieval Studies. https://t.co/7jNJDx0hgd

But why? Why should we care about those who will regard medieval historians as tainted with Nazism? About you being called a Nazi, about people tacitly suggesting that you support their ideas? What have you done to protect Indo-Europeanists from the accusations, from the name-calling, from the shame?

Perhaps more importantly: now that you have become aware of this problem for the study of the western Middle Ages… What have you planned to do to help Indo-European studies once you are free from that yoke, that presumption of guilt? Probably nothing, you just care about yourselves. We all do.

I think it might be actually beneficial for Academia if more scholars suffer the same discrimination, if Nazis keep widening their areas of interest, so that we can all just ignore a simplistic and overused Nazi-shaming by stupid critics. 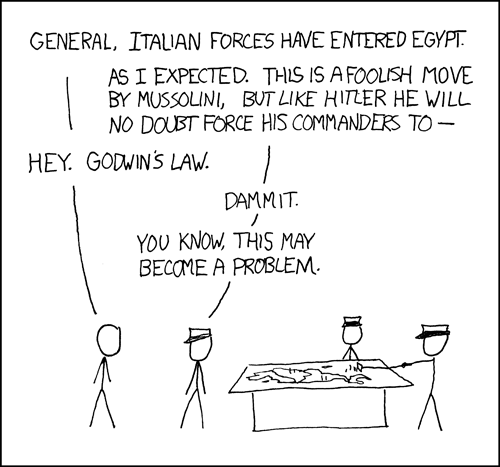 I don’t recall anyone defending Indo-Europeanists from those playing the Nazi card. The most recent example I know is the discussion around Lazaridis et al. (2017) paper, on Minoans and Mycenaeans. Some outrage from those involved in Human Evolutionary Biology (read the comments), but not too much from the rest of the world; too much concern this year about poor medievalists to care, I suppose.

You might not remember the infinite other times when you didn’t care about us being called Nazis because of our interest in (or writings about) our beloved academic field. But we do. And if you are complaining now, you certainly knew what was happening (what is happening), because how else could you know what this new love of right populists means for Medieval History, the shit it will bring?

Now your turn has come to enjoy the populace’s unending ad Nazium arguments. Publish anything about the social life in the Mediaevum, about medieval wars, religion, peoples, languages, symbols, etc., and just about anything that does not follow perfect political correctness will get you publicly shamed. Publish anything remotely interesting, and populist sites will publicise and manipulate your words, and critics and journalists will destroy your work by using populists’ words to describe it, not yours.

But, really, you shouldn’t care about the automatic association of your field with Nazis, about the unending insults, about the tacit (and oftentimes also explicit) link they will make of your work with Nazi ideas.

Just take a look at Indo-European studies. Not many Nazis have felt inclined to study (this or any other subject) because of their historical fixation with Aryans, so fear not, they will not take over your scholarships. However, their fixation has been a great filter for our field, to get rid of the weak of the heart, of those who care too much about what other people think, of those who are not convinced that this is what they want to do.

It seems to me that Indo-European studies have fewer scholars than it should, compared to other (in my humble opinion less promising or interesting) subjects, but the community is strong. Not much fuck is given about political correctness when publishing theories and models on the spread of Indo-Europeans, on their myths and customs, on their language. ‘Patrilocality’, ‘violent conquest’, ‘migration of peoples’, ‘women exchange’, ‘slavery’, are common (otherwise unpopular) words to describe their history and evolution, their ancestry, and they are becoming popular to describe anthropological evolution in general. We are in a privileged position to observe reality, and also the stupid political correctness of many.

Also, you might find comfort when passing this moment of truth professionally and personally knowing that, in the future, another field – whose scholars don’t give a fuck now about your popular shaming – will be their love object, and you will be able to tell them what I am telling you now.

Welcome to the dark side!

(EDIT 9/SEP/2017) I just realized that most (tacit or explicit) Nazi-shaming come from people within the field, who are obviously the ones interested in what you write. It is without a doubt the easiest way to criticise the work of your peers, who won’t need to do their research and answer formally with careful investigation. So good luck with that too!