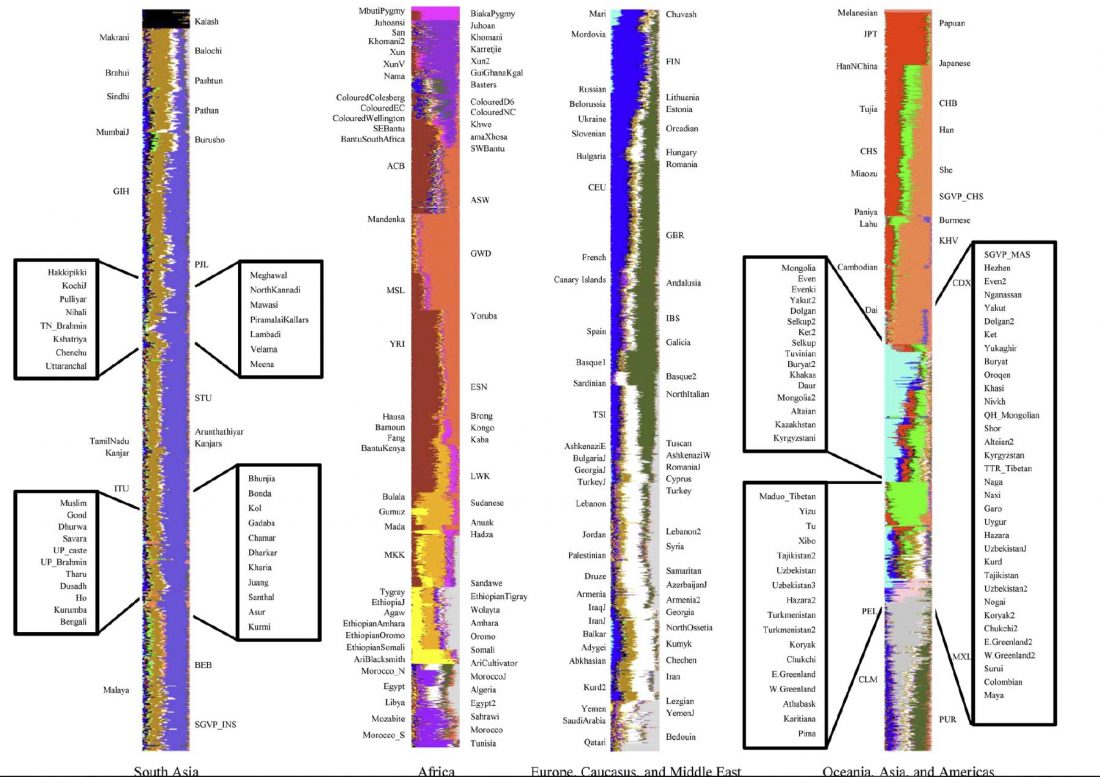 Genetic and archaeological studies have established a sub-Saharan African origin for anatomically modern humans with subsequent migrations out of Africa. Using the largest multi-locus data set known to date, we investigated genetic differentiation of early modern humans, human admixture and migration events, and relationships among ancestries and language groups. We compiled publicly available genome-wide genotype data on 5,966 individuals from 282 global samples, representing 30 primary language families. The best evidence supports 21 ancestries that delineate genetic structure of present-day human populations. Independent of self-identified ethno-linguistic labels, the vast majority (97.3%) of individuals have mixed ancestry, with evidence of multiple ancestries in 96.8% of samples and on all continents. The data indicate that continents, ethno-linguistic groups, races, ethnicities, and individuals all show substantial ancestral heterogeneity. We estimated correlation coefficients ranging from 0.522 to 0.962 between ancestries and language families or branches. Ancestry data support the grouping of Kwadi-Khoe, Kx’a, and Tuu languages, support the exclusion of Omotic languages from the Afroasiatic language family, and do not support the proposed Dené-Yeniseian language family as a genetically valid grouping. Ancestry data yield insight into a deeper past than linguistic data can, while linguistic data provide clarity to ancestry data.

Sure, admixture analysis came to save the day. Yet again. Now it’s not just Archaeology related to language anymore, it’s Linguistics; all modern languages and their classification, no less. Because why the hell not? Why would anyone study languages, history, archaeology, etc. when you can run certain algorithms on free datasets of modern populations to explain everything?

What I am criticising here, as always, is not the study per se, its methods (PCA, the use of Admixture or any other tools), or its results, which might be quite interesting – even regarding the origin or position of certain languages (or more precisely their speakers) within their linguistic groups; it’s the many broad, unsupported, striking conclusions (read the article if you want to see more wishful thinking).

This is obviously simplistic citebait – that benefits only journals and authors, and it is therefore tacitly encouraged -, but not knowledge, because it is not supported by any linguistic or archaeological data or expertise.

Is anyone with a minimum knowledge of languages, or general anthropology, actually reviewing these articles?

Featured image: Ancestry analysis of the global data set, from the article.