Today is International Mother Language Day, a day as good as any other to start or continue learning Proto-Indo-European.

NOTE. There is no date yet for uploading it to Amazon for purchase. Many readers like me prefer to have the printed text instead of the online version, but Fernando will probably wait some time to receive comments about gross errors or omissions, to avoid having to prepare and send the materials more than once.

The Late Proto-Indo-European Etymological Dictionary has also been updated accompanying this release. 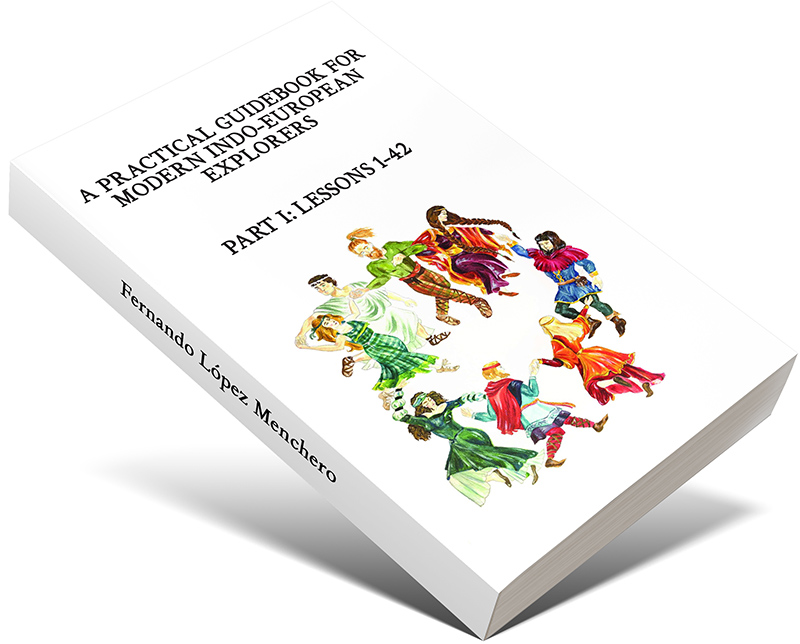 As I wrote in the announcement of the first version, this is a great, free resource to learn Late Proto-Indo-European as a modern language, from the most basic level up to an intermediate level (estimated B1–B2, depending on one’s previous background in Indo-European and classical languages).

Instead of working on unending details and discussions of the language reconstruction, it takes Late Proto-Indo-European as a learned, modern language that can be used for communication, so that people not used to studying with university manuals on historical linguistics can learn almost everything necessary about PIE in the most comfortable way.

Taken as a modern language, the system devised to represent Proto-Indo-European has its problems, as many of you notice at first sight:

1. The conventional selections for the writing system remain a controversial subject. This aspect has to be understood with a historical perspective: I devised the basic orthography around 2004, taking ASCII as the universally available set of characters in any computer or phone. If I remember correctly, Unicode support was quite limited back then. Probably the most striking aspect for most readers is the use of c for gʷ, which was based on its original value in Latin, even though today it is commonly associated with affricates.

NOTE. Despite its interest for many readers, this is a purely conventional question, mostly irrelevant for the acquisition of the language, and one that can be changed at any given time. There have been all kinds of proposals, from an Old Italic script (proposed by us, based on its use in Latin, Ogham, and in the Elder Futhark), to Ancient Greek, to cuneiform…

2. In phonology, the system avoids the use of laryngeals, in an attempt to exclude the controversy surrounding their actual nature and evolution from Indo-Anatolian to Indo-Tocharian, and further to Core Indo-European and its early dialects (which featured probably a merged laryngeal, possibly a glottal stop). On the other hand, rather than a simplistic Brugmannian approach to PIE reconstruction, Fernando uses an ingenious set of writing conventions for Late PIE dialectal vowel outputs – somehow akin to the Breton language super-dialectal orthography. This allows for different pronunciations, and theoretically also for immediately inferring the most likely laryngeal to be reconstructed. Some readers, on the other hand, prefer to simply write the three laryngeals in the Facebook group, which is of course fine, too, although somehow anachronistic for Late PIE.

NOTE. About the representation of “palatovelars”, I proposed at some point to write them in a kind of super-dialectal orthography, but Fernando argued convincingly (1) that – much like the evolution of Latin c /k/ in Romance languages – it does not make sense to include this but not many other limited dialectal phonological developments; (2) that the laryngeal question is qualitatively different, and has to do with synchronous developments within PIE; and (3) that including this and potentially other features would add too much unnecessary overhead in terms of extra characters.

3. The grammar offers preferably a selection of mainstream theories among the available ones, but – given the common trend of linguists to argue for two or three main competing theories – often a “greatest common divisor” approach is taken whenever possible with important questions; such as, for example, with the inflection or with passive diathesis in the verbal system, or with the different declensions and endings in the nominal system. This approach departs thus sharply from the initial aim of offering a simple language system to be learned outside of the complexities of historical linguistics, but it allows in return for any reader to learn the basics of PIE reconstruction, and also to select their preferred (usually early dialectal) version.

All in all, it is the perfect companion for anyone outside of the field of Indo-European studies, and probably also for many who can be considered to work within the field (e.g. in archaeology or population genomics), who are not particularly interested in the complexities of language reconstruction, but who might still be interested in learning Proto-Indo-European.

It is good practice to be registered and logged in to comment.
Please keep the discussion of this post on topic.
Civilized discussion. Academic tone.
For other topics, use the forums instead.
8 Comments
Oldest
Newest
Inline Feedbacks
View all comments